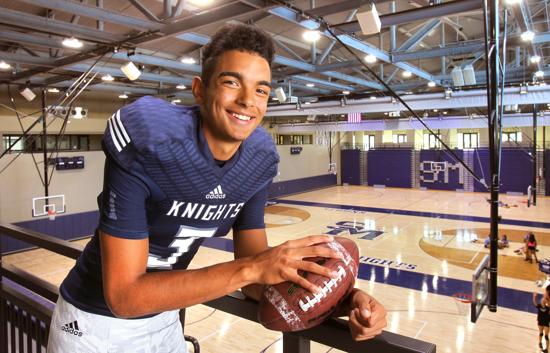 SAN MARCOS — The lure of Friday Night Lights was too much for Johnny McWilliams to escape.

A second-team all-county selection in basketball last season as a sophomore, McWilliams found himself sitting in the stands at football games and rooting for his friends as San Marcos went 9-5 and lost to Granite Hills in the San Diego Section Division III championship game.

"I missed it," said McWilliams, who played football as a freshman. "My background is in football, but my future is in basketball.

"My dad let me make my own decision. So I decided to play both sports."

Johnny McWilliams Sr. played at USC, was a third-round draft pick and played five years and 74 games in the NFL.

A tight end, he caught 73 passes for 690 yards and nine touchdowns with the Vikings and Cardinals.

So San Marcos football coach Jason Texler put Johnny at receiver this season where the bumps and bruises would be held to a minimum.

The strategy has paid off.

"This game is going to be crazy," McWilliams said. "It's an amazing feeling playing before a big crowd on Friday nights, and we'll have a big crowd Friday.

"Every game in basketball is a dog fight, I love the competition, but we really only get one or two big crowds a season."

McWilliams' decision to play football has paid off with 25 receptions for 594 yards and eight TDs.

"Johnny has the height, he runs well, he's tough, and he has ball skills," Texler said. "Plus, he's a savvy kid.

"I know basketball is his first love. I know football is like a hobby.

"But I'm telling you, he's a good football player. He's an unknown in the recruiting world because he didn't play last season. But if he plays with us this summer, he'll get recruited."

McWilliams is getting recruited hard in basketball.

A three-star prospect by ESPN, McWilliams averaged 15.9 points and 4.0 rebounds last season for a Knights team, that went 21-9.

Pepperdine has already offered him a scholarship.

"And he's got 10 other good offers," said San Marcos basketball coach Dante Carey. "I don't doubt he could play college football, but watching him play football scares me because he's a big-time scorer for us.

"I know he can play college basketball.

"He's a shooting guard, who could play small forward because I believe he'll get bigger and stronger."

"My coaches are great," McWilliams said. "Texler allows me to slip away from practice to put up shots for an hour. And Dante tells me not to get hurt playing football.

"I've had some bumps and bruises. I get sore, but I play full out.

"Football is going to help me with basketball. My legs are stronger. I think I'll be better with contact on the court. And I've got better lift.

"But I'm still a basketball player."