Bailey getting his kicks 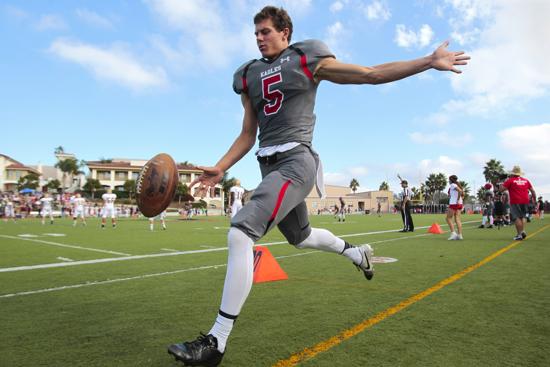 “The sound of the ball off his foot got your attention,” said Wallace, the football coach at Santa Fe Christian. “The sound made you turn your head and look.”

Bailey has been turning heads ever since.

The senior has emerged as the top high school kicker in the San Diego Section and one of the best in the country.

Kohl’s Professional Camps, which does the kicking evaluations for ESPN, rates Bailey as the No. 4 place-kicker and No. 6 punter in the nation.
He has committed to play at Stanford. Players ahead of him have made commitments to Notre Dame, Oklahoma, Baylor, Tennessee, Missouri and South Carolina.

“The Kohl’s camp put me on the national radar,” said Bailey. “That got me to the Stanford camp. And that got me a scholarship offer.”

Until then, Bailey had been looking at Cornell and drew mild interest from Cal, USC and UCLA.

The coaches at Stanford have told Bailey they want him as a punter and kickoff specialist. But they would consider letting him kick field goals if he can earn the job.

With Santa Fe Christian struggling to a 5-5 record entering Friday’s first-round playoff game against La Jolla, Bailey has had more chances to kick field goals, and fewer chances for PATs and to kick off.

Wallace said if the SFC offense can get to the opponent’s 40, Bailey is a weapon.

Bailey has connected from 62 yards in practice and feels comfortable from 55 yards and in.

“This is a great kid, who works hard and has the potential to play at the NFL level,” said Michael Husted, a kicking guru who made 142 field goals — with a long of 57 — and 192 PATs in an eight-year NFL career with the Bucs, Raiders, Redskins and Chiefs.

“He’s very gifted. He has leverage and generates force with his swing. He was raw when we got him, but he had ability.

“A kicker’s leg swing is like a golf swing. You work with it, you fine tune it and you reduce the margin of error.

“Like a golfer on the tee box, you want a good, clean, smooth technique.”

At 6-feet-2, 185 pounds, Bailey isn’t your ordinary, non-athletic kicker.
Until this season, he played on offense and defense for Santa Fe Christian.
He was a soccer player in middle school and as a freshman at SFC but gave it up for football.

He’s also a sprinter on the track team and has a school-record leap of 21 feet, 4 inches in the long jump.

An ankle injury, suffered while playing football last season, led to surgery and the end of his playing days on offense and defense.

“I heard a pop in my right ankle after a play,” Bailey said. “Then I heard it pop twice more as I came off the field.

“I had an MRI and I had hurt the tendons on the outside of the ankle.

“I had surgery, and when I recovered it seemed like I had more flexibility.”

A month after the surgery, Bailey was back kicking.

“The hardest thing has been giving up playing,” said Bailey. “I’m watching my friends score touchdowns and play defense, and I can’t help.

“I appreciate the coaches not pressuring me to be on the field. They understand my future is as a kicker. To keep me from going crazy, they’ve put in a series of fake punts and kicks.”

Bailey gives a measure of his success to long snapper Zach Reiner and holder Conner Whitton.

At Stanford, his long snapper will be Santa Fe Christian graduate Reed Miller, a junior who has snapped in every game for the Cardinal since he walked on campus.

“Reed’s dad is my track coach, and I’ve seen Reed go from good to great,” Bailey said. “The fact Reed is there, the fact we’re friends is comforting.

“College is going to be stressful, but I’m confident I can do all the kicking at Stanford.”