Forced to play in first round of playoffs, Pointers roll past Mount Miguel 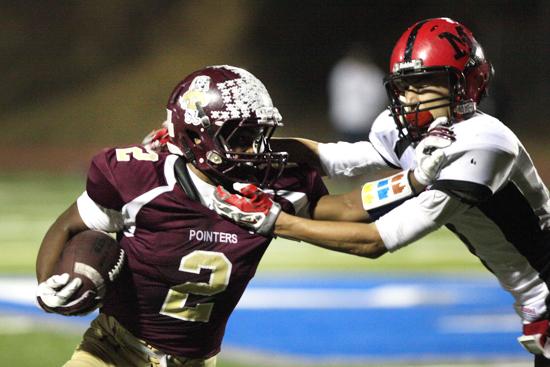 Mike Hastings admits he was puzzled.

Looking at the CIF Division I football playoff brackets for the first time last Saturday, he expected his Point Loma squad to have a first-round bye. After all, going into the final game of the regular season they were in the running for an Open Division berth.

Instead, they were seeded fifth, meaning they’d have a first-round game.

Not that it mattered as the Pointers cruised to a 47-35 victory Friday over Mount Miguel at Balboa Stadium, setting up a quarterfinal rematch at Madison.

“I wondered about it because this year we could have used a bye to give some of our banged up kids a rest,” admitted Hastings. “I thought we played a pretty good schedule (the only loss before the season finale was a one-point setback to Open division Ramona).

“Under the old way, our win against El Camino would have helped us because El Camino beat La Costa Canyon.”

“It bothered me until Saturday night, then I started thinking of playing again,” said Hastings, whose team was one of only three clubs in the division with a winning record. In fact, they could claim to be the best team playing on the playoff’s first night.

“Friday night lights as the home team is pretty special because we don’t have lights. It gave us a chance to rebound from our loss to Madison. But we still had to prove we deserved to be there.”

They did just that.

Jaylen Griffin, who was injured early in the first quarter against Madison, scored three times in the first half as the Pointers outscored Mount Miguel 19-0 in the second quarter for a 33-14 lead before pulling away for the win with reserves playing the fourth quarter.

Griffin scored on runs of 10 and 15 yards as well as catching a 42-yard TD pass from Gavin Grady 2.5 seconds before the break as the Pointers held the Matadors (3-8) to 26 yards in the second quarter.

Equally impressive was 6-foot-7 Tim O’Brien, who caught a 41-yard TD in addition to being credited with 12 tackles as a defensive end.

Mount Miguel quarterback Jacob Castillo passed for all five touchdowns, including a 91-yarder to Gary Haskins to start the fourth quarter. Castillo was 16 of 28 for 356 yards, but he was also picked off twice.

His favorite target was Haskins who caught three passes — all TDs — for 125 yards.