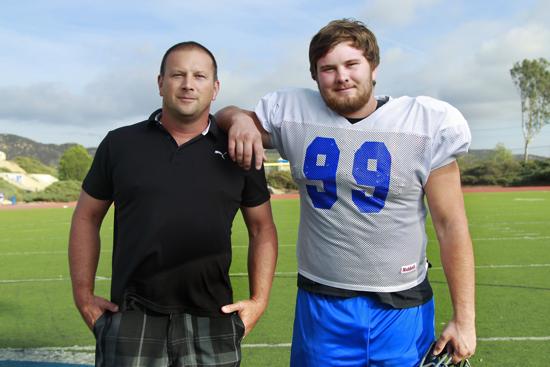 And for his father.

It’s a nod to the number Lucht’s dad wore during his playing days in Ohio.

“Football’s everything in northeast Ohio,” said Todd Lucht, who grew up within 50 miles of the Pro Football Hall of Fame in Canton.

Obsessed would not be too strong a word to describe Todd’s relationship with the game. And when his oldest son went out for football as a freshman at RB, the father could hardly contain himself.

There was one problem — the start of Austin’s football career coincided with Todd, a major in the Marines, being reassigned out of state.

Three long years came and went. Todd Lucht was set to retire this summer from a 22-year military career, which included serving in Iraq, just in time to return for Austin’s senior season.

That’s when Todd faced surgery to remove a brain tumor.

“When they said it had to come out, it definitely rocked my world,” said Todd. “I had a senior season of football to watch, a lot of surfing to do. Big, big plans. It’s God’s way of kind of smacking you back down.”

But this story has a happy ending for the Luchts. Todd now has a clean bill of health, and RB stands poised to conclude a memorable season.

The Broncos (8-2) host Scripps Ranch (5-6) tonight in a Division II quarterfinal game. It’s quite a resurgence for RB, which was 2-19 over the previous two seasons.

Austin Lucht joined the varsity as a sophomore, so he has greater appreciation than most for this season’s success. Having his father in the stands makes it even more special.

“It’s been really exciting for him to be here for good and be able to come to every game,” said Austin, a 6-foot-2, 300-pounder.

Austin Lucht never played youth football growing up. He was too big (there’s a weight limit), so he played just about everything else. It may have been a blessing, the skills learned in baseball, basketball, soccer and wrestling benefited him as he blossomed on the football field.

But, adds McCoy, “He’s very humble. He will talk to anybody on the team. He will spend his time talking to the freshmen. There’s a humility that makes guys gravitate to him.”

With his father away, Lucht had to grow up more quickly than most kids his age. He had a younger brother, Brian, a junior who plays baseball for the Broncos, and a younger sister, Cassidy, a freshman who plays soccer at the school, to look out for in addition to school and football.

“He was always a responsible kid,” said his mother, Sonita, who is a math teacher at Bernardo Heights Middle School. “He was a rule follower. But as far as maturing, this definitely made him feel more like the man of the house.”

Austin was missing the father figure in his life, however, even if his father was just a phone call away.

“He definitely looked to the team more,” said Rancho Bernardo quarterback Tucker Reed, who has played with Austin since they were freshmen. “He knew we were there for him.

“We look out for one another. He’s like a brother. He’s my left tackle. He watches my blind side.”

Todd Lucht followed his son’s career first from Kansas, where he was assigned during Austin’s freshman year. He had another parent send DVDs of each week’s game and made it back to San Diego for Austin’s last game of the season. Todd was reassigned to a base in Louisiana, where he was head of logistics, the following year. He was able to cobble together enough time off to come home and see a few of Austin’s games during his sophomore and junior seasons. The other games he was able to review on HUDL, a website where teams can load their game films.

Austin has the size and talent to play in college. San Diego State invited him to be a preferred walk-on, though he expects to earn a scholarship somewhere. He has his eye on Cal Poly SLO. Humboldt State or Sacramento State also could be an option.

“San Diego’s a really nice place to grow up,” said Austin, who carries a 3.5 GPA, “but I think I would prefer to move to a different area outside of San Diego just to experience some new things.”

Wherever Austin ends up, Todd Lucht will be there to watch him. Every moment has more meaning now.

Todd said he was originally diagnosed five years ago with a brain tumor called a meningioma. Treatment is not needed in many instances, though patients are closely monitored for changes.

A test six months ago revealed that Lucht’s tumor had grown and was beginning to push on his brain in an area that would affect his motor skills.

A fist-sized benign tumor was removed in August during a seven-hour surgery.

“The doctors made us feel secure,” said Sonita. “But it was just scary. Somebody opening your head up. ...”

“His mom passed away just about 10 years ago now from an aneurysm. Same kind of thing, she went in for surgery on the aneurysm and never made it out. That weighed in the back of our minds.”

The surgery’s success was a big relief. Physical therapy has helped Lucht improve his balance and regain strength in his left leg and foot. Lucht had an MRI last week and received the positive news on Tuesday when he visited the doctor.

“Good as new,” said Todd, who sees some pluses coming out of the challenges.

“With me being gone, it kind of created a buffer,” he said. “It gave Austin the opportunity to take ownership of his journey in football. That’s the way he’s wired. If it doesn’t belong to him, then he’s not going to stick with it. ... He did it his way. That’s what I’m most proud of.”

Sonita Lucht said her husband is “definitely gung-ho and maybe a little overwhelming for Austin.”

“Austin has a vision of what he wants,” she said. “It’s like Todd is opening every single door and Austin is kind of like, ‘I don’t need all of the doors open, just this door and this door.’ He gets a little overwhelmed and frustrated sometimes with Todd’s enthusiasm, but in the same breath he appreciates it.

“Todd’s trying to make up for all that lost time, so I can’t blame him. But I do have to talk him down sometimes.”

That’s understandable. He is a Marine.