Morse roars into the semifinals 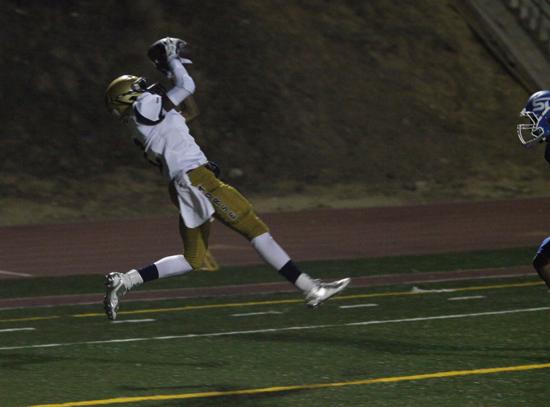 Morse High's Jaylin White leaps to grab a long pass in the end zone for a Tiger touchdown at the end of the second quarter. San Diego High School hosted Morse High school Friday night for both the junior and varsity football games.

The Morse High football team is one win away from playing for its first section championship in 18 years.

It’s a seemingly improbable rise for the Tigers, who didn’t get their first win on the field this season until Week 7.

Morse (6-6) began the year with four straight losses. The Tigers picked up a 2-0 victory in Week 5 when Francis Parker forfeited because of injuries. The Tigers were 1-5 before a 42-0 victory over winless San Diego.

“That’s kind of what goes on in the inner city,” said McNair. “We’ve got to coach our kids up. By the end of the year, we’re running pretty good.”

The Tigers (6-6) have won four straight games now, including Friday night’s stunning 12-0 upset of No. 3 seed Sweetwater in the Division III quarterfinals.

Not bad for the 11th-seeded team in a 12-team bracket. The next lowest seed still alive in the playoffs is No. 7 El Camino in Division I.

Morse’s roster numbered fewer than 30 players when the season started. Many of the team’s starters — McNair said at least seven of them — have to play both ways. As usual, they plucked players from both the freshman and junior varsity teams to bolster their numbers.

“As we saw kids within the program who had talent, I thought it was an opportunity to bring them up,” said McNair. “They understand the parameters we have. The kids we rely on do the best they can.

“We have a lot of young kids playing and it took them a little time to grow up.”

Senior Khyran Jackson-Barbee didn’t take over at quarterback until midseason. Freshman slot receiver Martell Irby and sophomore wing back Jaylin White were still on the junior varsity when the season began.

Now McNair says “those are the two players who made a big impact” since being promoted to the varsity. Irby and White each caught touchdown passes from Jackson-Barbee against the Red Devils.

Sweetwater came into the contest with a 10-0 record and the county’s longest active winning streak at 18 games. The Red Devils were averaging 38.5 points, mostly attributed to a running game chewing up 370 yards a game.

McNair had a plan to stop Sweetwater’s wing-T, drawing on his experience playing against Mar Vista four years ago. The Mariners were then coached by Brian Hay, who brought the wing-T with him when he moved over to Sweetwater.

“I basically used the same defense we used against them back then,” said McNair, who guided the Tigers to a 26-14 win over Mar Vista in 2010.

“We tried to contain the outside and make them run up the middle and stop them there.”

Sweetwater, which had scored 49 or more points five times this season, came up empty.

Morse meets second-seeded Christian (11-0), the team that eliminated the Tigers from last year’s playoffs, in Friday’s semifinal. The winner will play the Granite Hills-Hoover winner for the Division III title on Dec. 6 at Southwestern College.

McNair said Morse’s success has boosted the spirits of the student body and spilled out beyond the campus.

“It’s more or less for the community,” said McNair. “We look at our community and our school as the Morse, Lincoln, San Diego High, Hoover connection.

“We’re all looking at each other’s team and helping each other out. It’s not just for Morse. It’s for the whole neighborhood in general. The whole community is rallying behind all four of our schools.”