Hoover seniors learn to trust each other 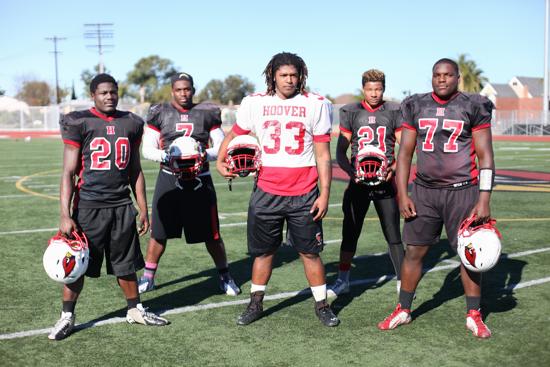 Shortly after a rare Thanksgiving football practice at Hoover this morning, the Cardinals will bow their heads before dinner and give thanks. Among the blessings are their Cardinals teammates, coaches and support staff who have worked their feathers off to transpose this moribund program into arguably the finest team in the 85-year history of Hoover.

The feel-good team of the year, Hoover has been on a roller coaster “Hooryde” ever since Jerry Ralph took over as head coach in the spring of 2012 and will play in its second-ever semifinal Friday night against Granite Hills in the San Diego Section Division III playoffs. Hoover (9-2) is top-seeded despite losing to No. 5 Granite Hills (9-3) 24-21 in Week 4.

“Each year they’ve gotten better and better,” Ralph said, “and now they finally got the big picture. These kids really believe in each other.”

Hoover has never won more than one playoff game in any season, the only other semifinal appearance coming in 2000. Dating to 1930, the Cardinals had won only six playoff games before Ralph took over in 2012.

“The overall difference is the winner’s mentality,” senior lineman Austin Brown said. “There’s not an ego issue with this group. Everyone’s willing to make sacrifices to win.”

This special group — there are only 25 of them — truly has embraced a new Hooryde, a slogan emblazoned on T-shirts worn by coaches and fans. It is one of accountability, both on and off the field. A program that regularly saw a third or more of its players become ineligible because of grades or discipline did not lose a single player this fall.

“It was an emergency,” Ralph said. “It has taken three long years, but we fixed it.”

One of those who stepped up in the classroom was Jaquille Bradford, a four-year starter who became ineligible halfway through his freshman year.

“I cost my team a playoff spot,” said Bradford, who was helped academically by former Chargers great Burt Grossman, an assistant on Ralph’s staff. “We had to buy into the system, and now we’re seeing the results.”

Said Ralph, who guided St. Augustine to section titles in 2005 and ’06, “I’ve had a great group of coaches who have stuck by me and mentored the kids and even taken some of them into their homes.”

A key group of seniors forged the turnaround — among them Bradford, Brown, Zyair Velazquez, Dominique Whitfield, Shaun Jones and George Jones, who has 1,343 rushing yards. All of them play both offense and defense. All of them have a chance to play next year in college.

Velazquez, nearly the biggest guy on the field, plays quarterback and defensive end in perhaps the best front four in the county. Bradford has 19 sacks after posting 28 last year. Brown has 12 sacks.

With five shutouts and only 97 points allowed, Hoover is fourth in the section in scoring defense after leading that category during last year’s 8-4 campaign.

“Our defense is so fast, tenacious and nasty,” Ralph said. “That is a direct result of our defensive coordinator Derek Dahlen.”

“Having so few players,” Dahlen said, “these guys have to hold themselves accountable because they know nobody’s there to take their spot.”

They also know reality. Two years ago, shortly after graduation, running back Rickquese McCoy was shot and killed by a suspected gang member.

“A lot of people don’t expect good things to come out of the inner city,” Brown said. “This is a great opportunity for us. It’s a personal endeavor for us to prove to others we can do this.

“It’s been a real progression of growth every year. Not just in football but in teaching us how to become better men.”