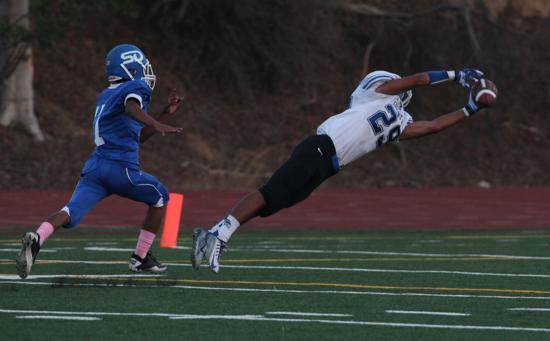 La Jolla Country Day receiver Brennan Goring, who has 75 catches for 1,158 yards and 15 TDs, will try to get open Friday against Vincent Memorial.

Preview: Second-seeded Vincent Memorial and No. 5 La Jolla Country Day met during the regular season each of the past five years — with the Torreys compiling a 5-0 record — but didn’t schedule a game this season. Perhaps they knew they’d be seeing each other with a little more on the line. Vincent’s semifinal victory gave the school its first 10-win season. The Scots have averaged 30.5 points a game while allowing 10.9, all against Division V opponents. LJCD has averaged 32.1 points a game and allowed 29.4, the numbers skewed by playing eight games against Division III and IV teams. The Torreys have outscored their four Division V opponents 196-47.

Players to watch: The running game is led by a pair of senior RBs in Ernesto Araujo (793 yards, 11 TDs) and Fidel Ruiz (405 yards, 6 TDs), who is averaging a team-leading 11.3 yards per carry. Junior QB Hector Robinson (1,052 yards, 10 TDs) spreads the ball around a handful of receivers led by senior Alejandro Garcia (55 catches, 434 yards, 4 TDs). Ruiz and Araujo are the top tacklers on defense. Senior DE Emiliano leads the team with seven sacks.

Season highlight: Marching through the playoffs with a 24-15 win over Crawford and a 30-0 victory over Classical to reach the finals for the first time.

Quotable: “To be successful, we need to stick to what we do best and then find a way to stop them,” said Castro. “We’re a well-balanced team, so we’ll take what they give us.”

Championship past: No previous appearances.

Little-known fact: The school opened in 1949 as Our Lady of Guadalupe Academy, an all-girls school. It moved to its current site in Calexico in 1966, became coed and was renamed Vincent Memorial.

Season highlight: LJCD has had something to prove after being seeded No. 5 in the playoffs, so knocking off top-seeded Holtville, the defending Division V champion, 53-20 last week had to feel good.

Quotable: “We have something to prove,” said Hales. “We want to show we’re the best team in Division V. ... It’s a championship game. You don’t get these opportunities very often, and that’s what we’ve said to the players.”

Little-known fact: There were those who questioned the ability of LJCD RB Rashaan Salaam in the early 1990s because he played 8-man football. His talent was confirmed when he won the Heisman Trophy in 1994 for Colorado. Salaam also played four years in the NFL.