Helix moves past semis and Cathedral 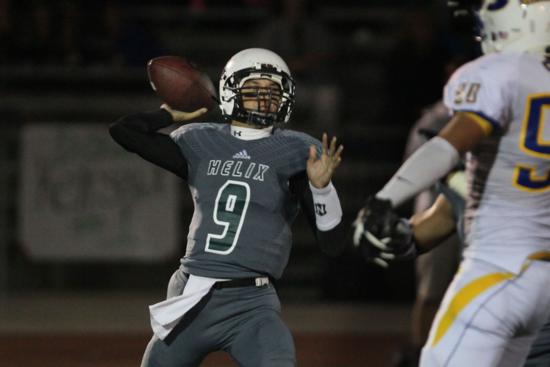 Helix quarterback Michael Austin (shown in a game earlier this season) threw two touchdown passes in the Highlanders' win over Cathedral on Friday.

No one said anything, but Helix quarterback Michael Austin remembered.

The Highlanders missed out on reaching the San Diego Section football finals the last two years courtesy of semifinal losses.

The junior quarterback made sure that wouldn’t happen again, throwing two touchdown passes and running 87 yards for a fourth-quarter score in a 27-5 win over Cathedral Catholic on Friday night in the Open Division semifinals.

After snapping the 10-game winning streak of Cathedral Catholic (10-2) and ending the Dons’ hopes of a seventh title appearance in the last eight years, No. 3–seeded Helix (10-2) will face No. 1 Oceanside — which beat No. 4 Mission Hills 38-31 — in the Open Division final, Dec. 6 at 7 p.m. at Southwestern College.

“We hadn’t talked about the last two years, but I remember,” Austin said. “This is one of the best feelings ever. This was an old-school football game, the type of game we expected it to be, just a good old-fashioned, smash-mouth game.”

Austin found DaShawn Keirsey Jr. alone in the end zone for a 16-yard TD and a 13-3 lead with 1:27 left before halftime. Austin also hit Keirsey for a 2-yard TD in the third quarter.