Saints win a wild one for Division I title

St. Augustine scores on 8-yard touchdown pass with three seconds to play in the game 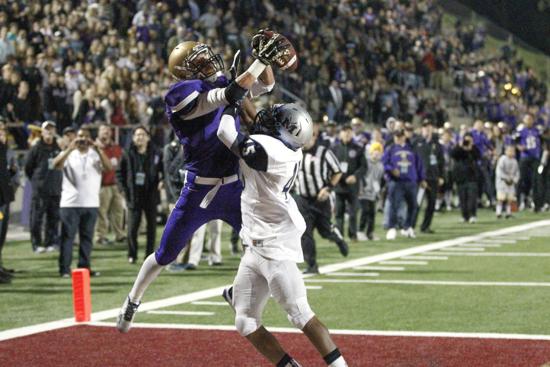 Chula Vista — Like the Rumble in the Jungle and the Thrilla in Manila, Friday night’s San Diego Section Division I championship game was two heavyweights slugging it out in the middle of the ring.

And when the final bell rang, St. Augustine had landed one more big blow, overcoming a two-touchdown second-half deficit, thundering to a 49-42 victory Madison at Southwestern College.

The final score — an 8-yard scoring pass from Thomas Goodridge to Jacob Baker — came with three seconds to play.

“My idea was to throw it up and let Jacob do his work out there,” said Goodridge. “There wasn’t a doubt in my mind (when they were down two TDs). I always thought we could win this. I knew the whole time. There was never a doubt in my mind we were going to win this game.

“This is incredible. It’s a dream come true. Ever since I was young I always wanted to win a CIF championship.”

Baker was heavily guarded in the corner of the end zone and the officials had to huddle before calling it a touchdown.

“I was so excited,” Baker said. “I wasn’t going to drop this one. I was doing it for Frank and Quinn and everybody else.”

Playing without defensive star Frank Buncom IV, who left the game at the half on crutches with ice on his left knee and didn’t play in the second half, the Saints gave up 478 total yards and 15 plays of 10 yards or more.

But the Saints had 489 yards total offense, 366 rushing with 255 of those by Elijah Preston.

“The offense could not be stopped tonight and the defense found a way,” said Saints coach Richard Sanchez.

Madison led 21-14 at the half with the teams exchanging big plays.

The Saints got a 21-yard run from Preston and a 45-yard pass play from Goodridge to Buncom to set up a 3-yard TD run by Preston.

Madison countered with 34- and 26-yard runs by Isaiah Osborne and scored on a one-yard run by Kareem Coles.

Coles had a 23-yard run on Madison’s next possession and scored on a 15-yard run.

The Saints tied it with 57 seconds to play in the half with the help of a 32-yard run by Preston. Francoise Sims got the TD on a 7-yard run.

Madison had two more big plays remaining with Coles running for 39 yards, then passing 21 to Marc Quinlin. That set up a 5-yard TD run by Shaeed Madyun on a speed sweep with 19 seconds left.

The second half was much of the same with Osborne scoring on a 51-yard run to start the third quarter. Preston had a seven-yard TD run to cut the deficit to 28-21.

A 29-yard pass from Coles to Shaeed Madyun gave Madison another 14-point lead.

The Saints came right back, scoring on a six-yard run by Preston.

Then it was all St. Augustine as the Saints got a 25-yard scoring run from Darrell Broussard with 2:10

to play in the third quarter, a three-yard scoring run from Franciose Sims with 7:09 to play and

finally the Goodridge strike to Baker on a fade in the right corner of the end zone.

Goodridge finished with 123 yards passing for the Saints.

carries for 107 yards, but was sacked three times by Thomas Browne.