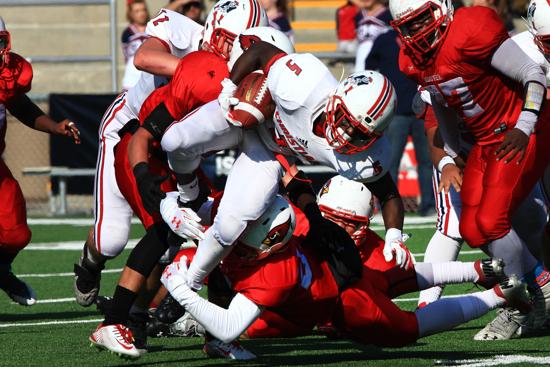 In addition to rushing for 93 yards, Christian junior Adrian Petty (5) returned a kick 77 yards for a touchdown.

CHULA VISTA — Ask a dozen people the play of the game for virtually any football contest and you might get a dozen different answers.

Not if you asked the Christian High coaching staff, players and the Patriots fans.

Adrian Petty’s 77-yard return of a kickoff following a safety was the jolt Christian needed to shake off the championship jitters en route to a 31-9 San Diego Section Division III victory over Hoover, extending the school’s winning streak to 20 games and creating an opportunity for more.

The Patriots (13-0) will await word today on the state Division IV playoffs that were denied the team a year ago.

Petty wasn’t on that squad, but he certainly made his presence known Saturday at Southwestern College.

After teammate Chad Humphries’ end zone tackle on a Hoover running back pared the Cardinals’ 3-0 lead to a single point, Hoover kicked off instead of punting.

Petty gathered in the ball at the 23 and streaked back up the field, past numerous would-be tacklers before stopping in the Hoover end zone.

Although Hoover would regain the lead on the first series of the second half on a 1-yard run by jumbo back Jaquille Bradford, Christian countered on a 79-yard pass from David Todd Jeremiah to Nick Sexton. When Emmanuel Reyes recovered a Hoover fumble to set up Petty’s 6-yard touchdown, it produced a 21-9 lead that would only expand.

“Yes, I’d have to say the kickoff return set the tone for the rest of the game,” said Petty, a 5-foot-7, 153-pound speedster who went on to gain 93 yards on 26 carries, adding a third TD from 8 yards out to conclude the scoring.

“After that we were in a groove. It was a huge opening and we needed it big to get going. Even when we were down 9-8 we weren’t worried because we have faith in each other.”

Christian coach Matt Oliver, who picked up his fifth section title while the Patriots were collecting their ninth overall, said the kickoff return ignited his club.

“It was a big-play day and that was the biggest,” said the veteran coach. “After Petty’s touchdown, we grabbed all the momentum. He can run for the tough yards, too. He’s our guy.

“Early in the year when he was getting three carries a game because we were playing with a running clock, I told him he’d get his chances.”

Hoover (10-3) was hoping for its first-ever football title, but when Bradford injured his foot on a running play, the Cardinals’ defense felt his absence immediately.

“We’re the first (Hoover) team to do what we did,” said the composed Bradford. “This game provided an emotion I’ve never felt before. It’s just too bad it didn’t turn out better.”