Parker senior finds back of the net 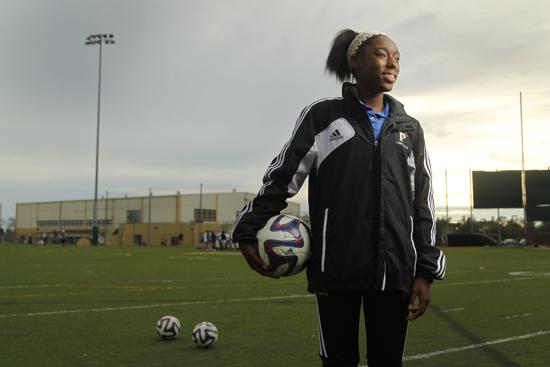 With a measure of calculation and confidence, Sasha Stephens carefully picked her uniform number when she joined the Francis Parker School girls soccer team her freshman year.

Stephens took note of the school record of 100 career goals, divided that by four, and came up with a per-season goal for goals, so to speak, that she put right on her back. Then No. 25 set off on a path that has put her well in range of the mark as a senior this season.

“The first year, I was like, ‘Yeah, I’m going to beat that record,’ ” said Stephens, who started with 24 goals as a freshman. “It pushes me to do my best.”

Parker coach Marc Thiebach mentioned the record to Stephens after getting a glimpse of her athletic abilities both running and kicking the ball in the school’s powder puff football game the fall of her freshman year.

“From Day One, Sasha’s been a tremendous player,” Thiebach said. “She’s gifted with a lot of speed. Over time, the biggest change has been how she’s developed technically and tactically to complement her speed. She’s definitely confident, too.”

Entering this season, Stephens has been wearing a cast as a result of a fractured right foot suffered during club soccer in the fall. After three months on the sidelines, she’s slated to return to play in about three weeks with most of the season still ahead.

“My first thought (when injured) was, ‘Oh, gosh, I’m going to miss powder puff (football),’ ” said Stephens, who regularly attends soccer practices in her new role as team captain. “My second thought was definitely the record and the team because I didn’t know how the team was going to do. As a leader, I want to be there playing for the team.”

Her devotion to the sport has been evident since she began competitive play about age 9. Once, when offered a trip to Jamaica for her uncle’s wedding, Stephens opted to stay home for a soccer tournament instead.

Over the years, too, Stephens has shown her speed running track. In eighth grade, when she last kept track of her times, her top marks were 58.5 seconds in the 400-meter run and 25.4 in the 200.

The 5-foot-7½ forward has committed to play Ivy League college soccer at Penn, where her aunt attended medical school. Meanwhile, she’s focused on returning to the field.

“If I focus on the positive, I’ll be back before I know it,” Stephens said. “I feel optimism is key.”