High school football fans in Lakeside and Oceanside and have big trophies on their holiday wish lists — the kind that say CIF State Champions. 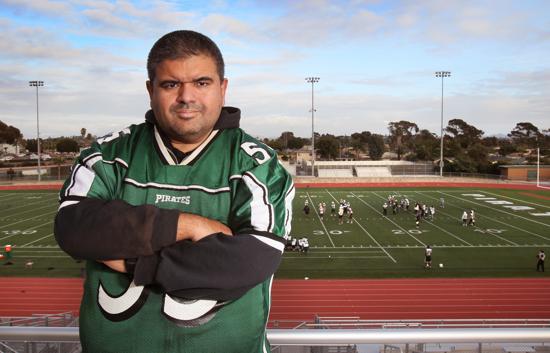 High school football fans in Oceanside and Lakeside have big trophies on their holiday wish lists — the kind that say CIF State Champions.

Football fever is simmering in both communities as hundreds of students are set to board buses, pack cars and crowd around live-streaming computers today and Saturday to watch their undefeated teams compete for state titles at the StubHub Center in Carson.

Christine Speedon, an administrative assistant who works the front desk at Oceanside High, said she’s been fielding dozens of calls each day from alumni and parents wanting to know how to buy tickets to StubHub. “My phone’s just buzzing,” she said.

Speedon’s “little cousin,” Matthew Romero, is the quarterback for the Pirates. She’s estimating 30 to 40 relatives are traveling to the game to support Romero.

Hundreds of students are also making the trek, including Oceanside High junior Jesse Mendoza, who said he’s riding on the “Rooter” spirit bus. It’s one of six chartered buses that will carry about 350 people — including players and the marching band — for the two-hour journey to Carson.

If the Oceanside team wins, Coach John Carroll said he’ll open up his house to players for a postgame party. It’ll be late, but state champions are deserving, he said.

“There is a lot of excitement,” he said. “The kids have done a phenomenal job.”

In rural Lakeside — where El Capitan is the lone high school — the rodeo marquee at the Winter Gardens exit off state Route 67 has been flashing congratulatory messages to the team all week.

On the school’s campus, T-shirts, hats, jackets, stickers and other Vaqueros-brand merchandise have been hot items.

“We are absolutely thrilled about our Vaqueros playing for the state title,” Geygan said. “The majority of our staff are also El Cap graduates. Needless to say, this game hits close to home for us.”

The restaurant will host a live viewing party of the game Saturday, with fog machines going whenever the Vaqueros score a touchdown, Clevenger said.

“Most of these boys have played football with one another since they were in elementary school,” said Lakeside resident Tricia Digenan. “This is a wonderful story of love, friendship and a small-town team overcoming. This is the first time a football team from El Cap has gone this far.”

Alpine resident Steve Dolan, who grew up in Lakeside, said he remembered when El Capitan “couldn’t quite beat Kearny in the 1963 CIF finals.”

A win Saturday will be unforgettable, he said.

“It’s hard to imagine anything being bigger than the Lakeside Rodeo, but this is it,” Dolan said. “This team? Nothing can stop them. The parade down Woodside Avenue should be quite a spectacle after we win the state championship.”

“I’m very excited,” said Garcia — who’s been a fixture at games for the past 25 years. “They’ve been playing excellent football with heart and soul, and won a lot of games they were trailing and came back with guts and fortitude.”

Garcia, 43, is easy to spot at every game, wearing a No. 55 green Pirates jersey, waving an oversized flag and ringing a large bell after each touchdown.

Sadly, he said he might have to miss the championship game because his mother is ill.

Carroll, the coach, is thinking positive.

“He’ll be there,” says Carroll, who has led the football team for more than two decades and whose name was placed on the school’s stadium off Interstate 5 and Mission Avenue earlier this month.

Dina Marie Casato, a special education coordinator with Oceanside Unified School District, said she was waiting for an email from friends late Thursday, instructing her where they’ll meet up at a restaurant locally in Oceanside to watch the game. “I’m crazy excited,” Casato said. “This brings together the community.”