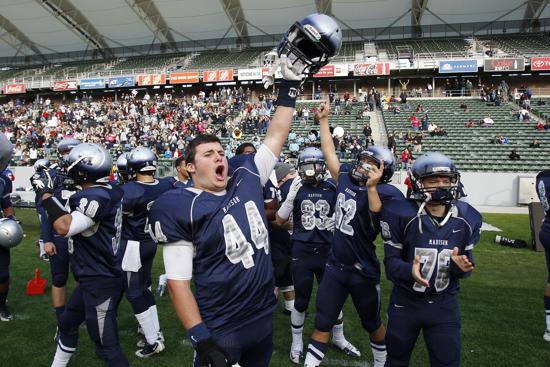 Madison cheers its state bowl championship at Carson in 2012.

Instead of returning to the StubHub Center, Sacramento State’s Hornet Stadium will be the home of the championship games for the next three years (2015-17), CIF Executive Director Roger Blake announced Friday afternoon.

Sacramento State, with a capacity of 21,195 and an artificial playing surface, hosted regional football championship games in 2012 and this year.

“We are excited to be holding this event at a facility which has hosted events such as the USA Track and Field Outdoor Championships and will allow for a memorable experience for our student athletes,” Blake said in a news release.

“Part of the overall experience is the travel,” Oceanside coach John Carroll said. “Teams that have to travel down here stay in a nice hotel, it’s a team bonding thing. This late in the year you don’t need team bonding.

“It would be an adventure for the players, but it is draining.”