Birthday could have been happier

El Capitan coach celebrates the day, but state title would have been perfect gift 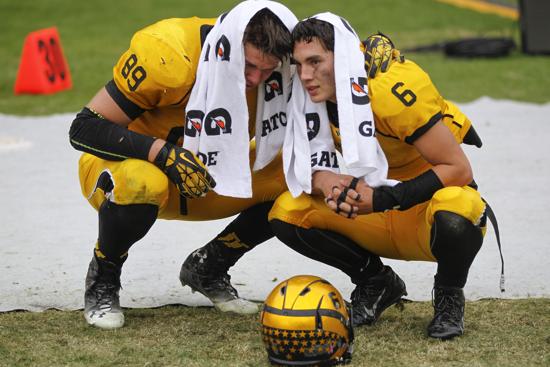 El Capitan players Clay Cromwell (left) and Jarred Turner console each other after the Vaqueros’ last-minute loss to Campolindo.

El Capitan came oh-so-close to presenting Ron Burner with a most memorable present Saturday, the school’s first state championship on his 57th birthday. It couldn’t get any better, right?

Positioned for a winning score with a minute to play against Moraga Campolindo, El Capitan fumbled and the Cougars’ Adam Remotto raced 90 yards the other way for an improbable 35-28 escape win at the StubHub Center.

“It still was (a good birthday),” said Burner, obviously disappointed but composed and able to smile. “It would have been better, obviously, if we’d have won.

“It’s a bummer when you lose your last game, but somebody’s got to lose it.

“I just wish they’d have won driving down the field. Not on a fumble return with a guy on a busted ankle (quarterback Brad Cagle) trying to chase him down.”

El Capitan had a minimum day at school Friday so the coaches decided to bus up to Carson in the afternoon. And what a send-off it was. Two fire trucks, a fire chief SUV and two police cruisers guided a caravan of two team buses and dozens of parents’ cars out of the El Cap parking lot and down Mapleview before getting onto state Route 67.

After a team meal at Outback Steakhouse in Anaheim, the Vaqueros went to StubHub and watched the first half of Oceanside’s 68-7 beating by Folsom.

Burner knows a thing or two about meals. His grandparents, Salvatore and Francesca Nicolosi, founded Nicolosi’s Restaurant shortly after emigrating from Sicily in 1951. Burner basically grew up in the business before he and his wife, Barbara, took ownership in 2009. They now have locations in San Carlos and downtown El Cajon.

The StubHub Center in Carson has natural grass, something El Capitan hasn’t played on in years. To prepare, the Vaqueros practiced Wednesday at an all-purpose grass field on the Barona Indian Reservation.

Among the El Capitan alumni attending the game was Matt LaChappa, the uncle of identical twin seniors Joey and John LaChappa and the younger brother of assistant coach Eagle LaChappa. Matt never misses a game despite having spent the past 19 years in a wheelchair after suffering a paralyzing stroke while warming up to pitch in a Rancho Cucamonga game in the Padres minor league system.

The Vaqueros’ QB coach is Lon Sheriff, the all-time leading passer at West Hills and a San Diego State alum who went through training camp with the Dolphins in 2003. Sheriff has been instrumental in tutoring Cagle, who has moved into the section’s all-time top five in career yards (7,506) and touchdowns (79). Sheriff’s daytime job involves managing surgical devices used during brain operations.