Shaq's son has room to grow

Shareef O’Neal stands 6-feet-7 at age 14 as he works to earn playing time at L.A. Windward 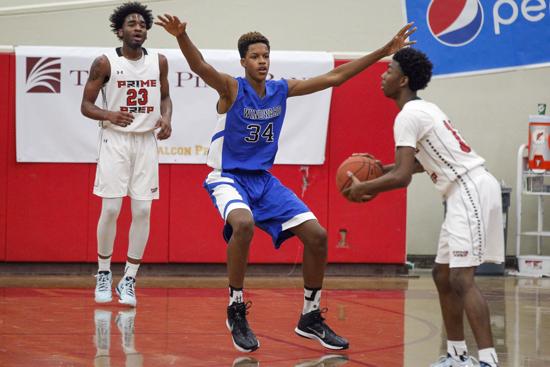 He walks through the door and not a single head turns.

He warms up like all the other players on his Windward High team from West Los Angeles.

The starting lineups are announced and he cheers on his teammates then sits on the bench.

When finally called on, he is announced and there is no murmur of anticipation from the crowd.

Shareef O’Neal is not a star. Not yet. After all, he’s just a freshman.

Check the name again. Yes, THAT O’Neal. He’s the son of Shaquille O’Neal who, had he walked through the doors at Torrey Pines High to see Shareef play, would have turned every head and had autograph seekers lined up like kids visiting Santa at Macy’s.

“Shareef (who often goes by the nickname Reef) is extremely athletic,” said Windward coach Steve Smith, who defers to the wishes of Shareef’s parents in trying to keep the spotlight off their son, knowing full well if he blossoms like everyone expects, he’ll soon be the center of attention.

“It’s really unfair to compare Shaq and Shareef, but I can tell you that Shareef is a better shooter. He has all of his dad’s skills and can shoot. Don’t forget, he’s just 14 years old.”

Shareef, who is averaging 3.4 points and 3.5 rebounds a game, is one of six freshmen on a team that also has six seniors who have earned their playing time. Not that Shareef is a wallflower.

“His teammates love him. He’s unassuming, but very aggressive on the court,” said Smith. “He’s unflappable in pressure situations, but consider that he plays against 18- and 19-year-olds when we’re going against prep schools.”

Which is exactly what Windward faced late Friday when it squared off against Dallas Prime Prep in the opening round of the National Division of the 25th Holiday Classic.

Wearing No. 34, Shareef took just one shot, a fadeaway jumper with the shot clock running out that missed. He pulled down three rebounds and got an assist, but Windward faded at the end, losing its fifth straight, 84-71, after starting the season 6-0.

Although about half of his 7-1 father’s playing weight at 170 pounds, Shareef did not hesitate to bang inside and no one had a chance to see if he shot free throws better than his father.

“All I know is this is a learning year for him — he’s hungry and he wants it. Next year is his time.”