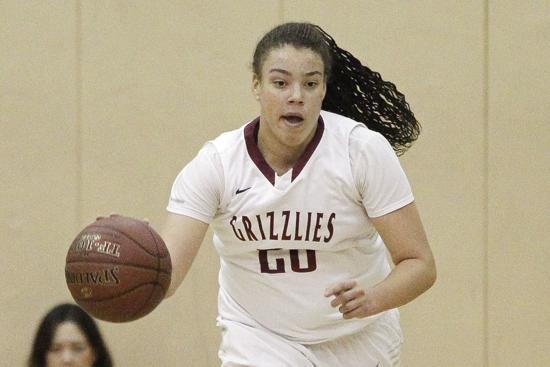 Mission Hills sophomore Khayla Rooks had 16 points and six rebounds for the No. 1-ranked Grizzlies.

SAN MARCOS — Twenty-six years ago, after the 1988-89 girls basketball season, Susie O’Brien of San Marcos and Cristina Willis of Mission Bay were named the 2A Division co-Players of the Year by San Diego Section coaches.

On Tuesday, their daughters went head-to-head in a nonleague game that will have playoff implications.

While Sierra Campisano, Cristina’s 6-foot-3 junior center, scored a game-high 27 points with 10 rebounds for No. 5 Torrey Pines, Khayla Rooks, Susie’s 6-foot sophomore center, tallied 16 points with six rebounds to lead No. 1-ranked Mission Hills to a 79-56 victory at home where the Grizzlies have not lost since early last year.

The section’s defending Division I champion Grizzlies (11-4) buried nine 3-pointers for the game, including seven in a first half in which they went 20-for-30 from the field to forge a 48-20 halftime lead.

Only three Falcons scored in the first half, just the opposite of what Mission Hills did.

“We have 10 girls who can score,” Mission Hills coach Chris Kroesch said. “I didn’t expect this kind of margin, though. We shot well in the first half, but turned it over and shot poorly in the second half.”

Five Grizzlies scored in double figures. In addition to Rooks, senior Roshell Lamug and junior Madison Adams, the Avocado East League Player of the Year last season, each had 13 points followed by sophomore Katelynn Nguyen with 11 and junior Emily Nunez with 10.

Despite scoring just eight points in the third quarter, the Grizzlies never had the lead shrink below 19 points.

“We wanted to make them shoot inefficient shots,” Kroesch said. “I think we did that in the first half. We have to learn to play through the whole game.”

After a subpar third quarter, the Grizzlies scored 23 points in the final period.

“When we move the ball, we can be tough to stop,” Kroesch added. “At times, especially in the third, we played a little too fast.”

Christina Ellis helped out Campisano, the Palomar League Player of the Year last season, with 17 points and nine rebounds.