Carroll steps down as Oceanside coach 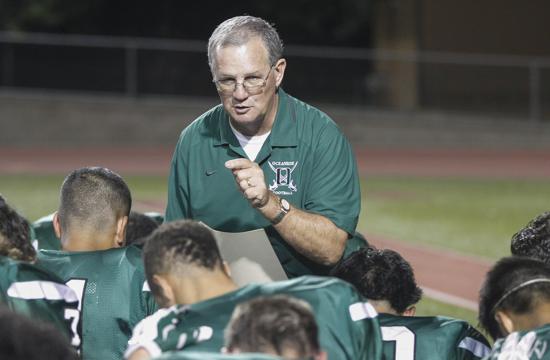 OCEANSIDE — Outside of his family, John Carroll admitted football was the No. 1 thing in his life.

Health took a back seat.

Wednesday, the Oceanside High coach reversed his field, making his health a top priority as he announced his retirement as Pirates head coach after 26 years at the helm.

He will continue to work at the school or for the district in another capacity.

“My life isn’t at risk, but since I injured my brain my physical quality has been different,” said Carroll, 57.

Oceanside was 14-1 this season, winning the section Open Division title before losing to Folsom in the state Division I final in Carson.

But the season was a struggle for Carroll, who suffered blood clots in his neck and injured his brain after doing a face plant last season while playing scout team quarterback at a practice.

In previous seasons, he suffered knee and shoulder injuries after being run over on the sidelines.

“This injury was different than the others,” Carroll said. “I pushed and fought, but it just wasn’t getting better.

“For the sake of my health, I realized I can’t coach to the extent I’d like.

“I wanted to teach until I was 60 and coach until they buried me on the field.

No one laughed when they played the Pirates, who won 76.7 percent of their games and made 22 straight trips to the section semifinals under Carroll.

“He’s a 24/7 guy. He prepared all day every day. As an opposing coach you knew you had to prepare just as hard, so he put the pressure on everyone.

“I know Oceanside will do the right thing and hire a great coach, but it won’t be the same without John Carroll there.”

Candidates could include offensive line coach Rick Gerardi, who has been on staff 25 years, and defensive coordinator Pulu Poumele, who played at Oceanside and has head coaching experience at San Marcos and El Camino.

“John’s decision threw me for a loop,” Gerardi said. “The last two years — this season in particular — have been hard for him physically. He should have been taking it easy, but he only knows one way, so he gutted it out.”

Asked if he would be interested in succeeding Carroll, Gerardi said, “I’d consider it under the right circumstances.

“But I also know what it takes to win here. When John took over, it took us five years to win a league championship, and we didn’t win a CIF title until ’95.

“John had drive and vision. He was intense. He put in the time and saw what worked.

“And the players bought in.”

“For a lot of us, our brothers, uncles and fathers played here,” Woo said. “We play for them.”

Indeed, Carroll’s sons — Tom, Steven and Jackson — all played for their father. And Peggy Carroll, John’s wife, is the team’s No. 1 fan.

JB Hunter, a junior lineman, said Carroll builds character in his players while building a legacy.

“We were really surprised when he told us he was retiring. We got choked up because he started to choke up.

“It didn’t matter who we were playing, that team was made up of all-stars and we had to play our best.

“He fought for us as people and players. And he stood right there next to you.”

That was the rub for Carroll.

Because of his injury, he was forced to coach from the press box on game day.

He sat on a chair at practice and used a bullhorn so as not to strain his voice.

“I hated the press box,” Carroll said. “You lose the intensity and emotion of the game up there.

“The kids are on the field fighting and competing, and I’m in the press box looking through a window.

Carlsbad coach Thadd MacNeal played for the Lancers against Carroll, then put in 20 years as an assistant coach at Capistrano Valley and Los Alamitos before becoming the head coach at Lakewood.

“John Carroll was fun to coach against,” MacNeal said. “You better be prepared or you were in trouble.

“John Carroll is right there with the best of ’em.”