S.D. Section approves proposal to include all 51 division champions of CIF's 10 sections 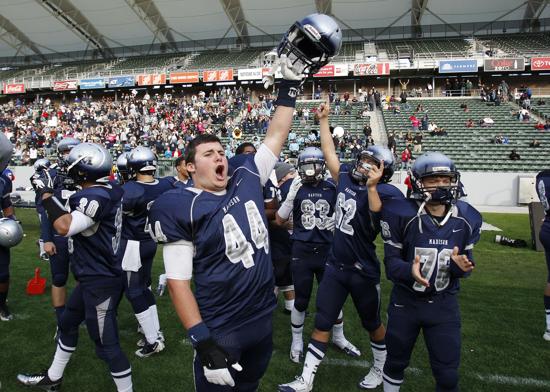 Madison won a state football championship in 2012, the last San Diego Section team to do so.

• All 51 division football champions from CIF’s 10 sections would be included, an increase over current 18-team playoff.

• Teams would play a regional game, with winners advancing to a state final.

• Five of the finals would be played at Sacramento State, with the others spread around the state.

It was the hot-button issue, the only item on the San Diego Section Board of Managers agenda that wasn’t passed unanimously.

But a proposal to include all 51 division champions from the CIF’s 10 sections in an expanded state football playoff starting this year did indeed pass during Wednesday’s meeting at the Hall of Champions.

Representatives from the Escondido, San Marcos, Imperial and Holtville school districts voted against the proposal, citing concerns over length of season and injuries.

The San Diego Section’s approval will now be recorded at the State Federated Council meeting Jan. 30 in Sacramento.

If the proposal to increase the number of teams from the current 18 is approved at the state level, section champions will advance to a state regional game.

“There is a lot of work ahead,” said Roger Blake, executive director of the California Interscholastic Federation. “There are a lot of moving parts here.

Football, however, presents some problems.

How best to pair up an odd number of teams has not been revealed.

“The middle of the state is going to determine what we do,” Blake said. “This season, Fresno Edison had to travel to Oceanside for a state football regional. And Paso Robles had to go to El Capitan.

“Because we’ve always done things one way — North and South — doesn’t mean we have to do it that way.

“So we’re going to look at best fits.”

San Diego champions would most likely play teams in the Southern or Los Angeles sections.

The Central and Central Coast sections, both of which are in the South, could make shorter trips to the North or the South.

Winners of regional games will advance to state finals, but it may not be a strict North vs. South.

“The best five state championship games will be played at Sacramento State,” Blake said. “For the other games we’ll look for geographical groupings.

“We’ll reserve high school and college sites around the state, and try and place games at those sites.”

San Diego Section Commissioner Jerry Schniepp hopes Southwestern College would be one of those sites.

Escondido High and Vista High, if the school has installed its new football seating, also could be possible host sites.

This season, some state champions played 16 games and the season ended the weekend of Dec. 19-20. Too late, too close to Christmas some say.

So a proposal to move up the starting date of the football season from the last week of August to the third could be in the offing.

“Only California and Texas are still playing the weekend before Christmas,” Blake said. “The other 48 states are done before that. So, yes, we’ll discuss moving the season up a week.”

In other Board of Managers news:

• Allowing schools more flexibility in determining their summer no-contact periods between coaches and athletes was approved.

• A proposal to expand the San Diego Section boys and girls swimming finals from 12 to 16 competitors passed.

• A proposal to move the boys lacrosse playoffs up a week was denied.

• A revision that expands the return-to-play protocol following a concussion was passed.

• A requirement for base coaches in baseball and softball to wear protective helmets was passed.

• After a passionate reading from Rhina Paredes, whose son, Eric, died in 2009 from sudden cardiac arrest, training coaches for awareness and management of SCA was approved.