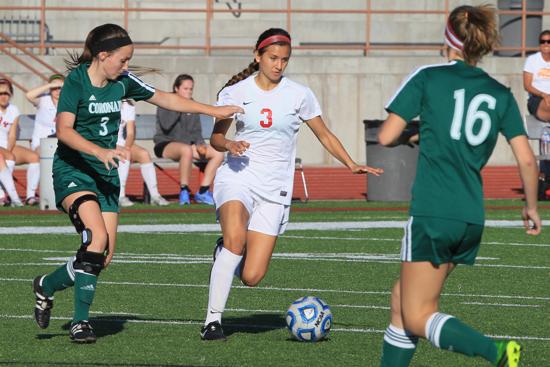 Cathedral Catholic senior Jessica Clegg (3) has helped boost the Dons to No. 1 in the San Diego Section Division I power rankings.

When Dawn Lee took her Cathedral Catholic High girls soccer team to the Mater Dei Premier Invitational tournament in December, there was a slight problem.

She only had 11 varsity players.

Injuries and illness had decimated Lee’s usual 19-player roster, forcing her to call up three junior varsity players to play in a tough Orange County tournament in which Cathedral Catholic had never enjoyed much success. Lee said she just didn’t want the team to get annihilated.

“I guess we just came together really well. We definitely weren’t expecting to win or even get that far,” senior captain Jessica Clegg said.

Clegg has been a constant for the Dons, who have used a different starting lineup in every game as the end of the regular season approaches. She has played in all 23 matches at center midfield, scoring six goals and contributing eight assists.

Neither number leads the team, but that doesn’t matter to a Cathedral squad ranked No. 1 in the San Diego Section Division I power rankings.

Said Lee: “(She’s) the silent leader. She’s not very vocal at all. She leads by example.”

Clegg is the crafty, hardworking orchestrator of a Dons’ playing style that revolves around good passing and defense.

Her presence is so important that Lee shuddered at the thought of the injury wave crashing down on Clegg. From the defenders she frequently helps to the forwards she hits with perfect passes to set up goals, her teammates recognize her impact and thus voted her captain.

She embraces the responsibility.

“I think of it as, I’m the captain, so basically I work for the team,” Clegg said. “Everything I do is for my team, so I’ll defend just because I know if I defend I’m helping someone else out.”

She rarely lights up the stat sheet since most of the time she’s the “assist to the assist.” She won’t be heard yelling “Come on!” loudly to her teammates.

“She’s the best type of leader because there’s no reason you wouldn’t want to listen to her when she does talk, because you just watch how she performs,” Lee said.

If there is a number that might measure Clegg’s importance, she had recorded a goal or an assist in 10 of Cathedral’s games this season. The Dons have won all 10 of those games, by a commanding 39-6 margin.

In such an unpredictable season, Cathedral remains strong. The Dons are 18-3-2 and in a good position for another Western League title at 5-1. With consistent winning comes even more responsibility.

“As soon as you get that mentality that ‘we’re the best,’ or ‘we don’t have to worry about anything,’ then we don’t do well,” Clegg said. “You can’t be arrogant, otherwise things won’t go your way.”

Cathedral Catholic girls soccer players who have made college commitments: