Mira Mesa too much for Morse this time 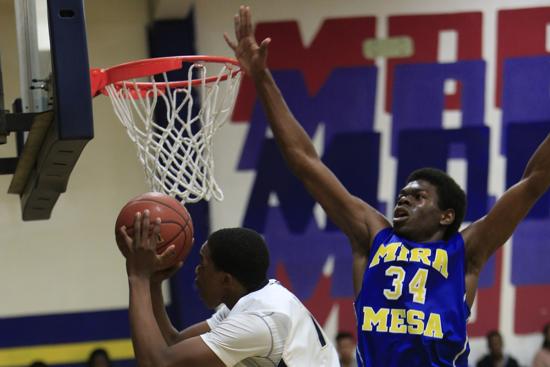 Mira Mesa standout James Ottey (34, shown in an earlier game) scored 20 points in the Marauders' win over Morse on Tuesday.

The Marauders, winners of eight straight heading into the Eastern League showdown with first-place Morse on Tuesday night, had to come from behind during regulation and three overtimes before prevailing 79-70 at home.

Malic Jules buried seven of eight free throws in the third overtime after drilling the game-tying 3-pointer with six seconds to play in regulation.

Asked which meant more to him, the 6-1 senior didn’t hesitate to say it was the free throws.

“The free throws won the game. That’s why they were better,” said Jules. “But they were both good.”

Morse, which is 10th in the Division I power rankings, found itself in trouble early when 6-11 sophomore Brandon McCoy got two quick fouls. He went to the bench before returning in the second quarter and promptly got whistled for his third.

McCoy stuck around to grab 14 rebounds before fouling out in the first overtime. His Marauders counterpart, 6-5 James Ottey, scored 20 points and helped Mira Mesa play smothering defense inside.

Meanwhile, the Marauders (19-6, 6-1), fifth in the Division II power rankings, were living dangerously, needing Kris Johnson’s two free throws with 2.7 seconds left to escape the first extra session. A clutch 3-point field goal by David Wheeler with 12.1 seconds to play tied the game at 60-60 in the second OT.

Jules ended all the suspense in the third overtime with his free-throw shooting.

Morse coach Bobby Sumler said beating a team like Mira Mesa, on the road, after topping them twice earlier, made it very tough. Even worse, Justin Davis, the team’s leader, picked up his fifth foul in the fourth quarter.

“He does everything for us,” said Sumler. “But this sets us up for the playoffs — by learning how to play tough on the road.”