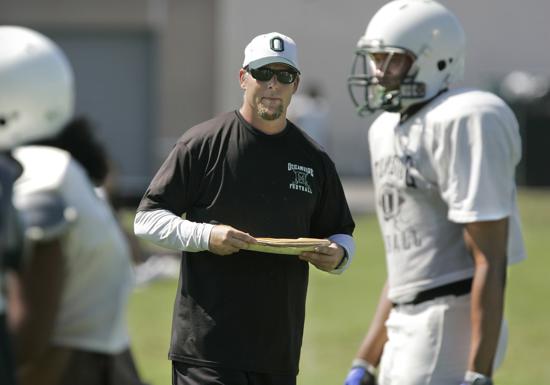 Turns out the best man for the job was already on campus.

He started his coaching career in 1997 at Madison, then moved over to Mira Mesa.

In 2008, Coleman joined John Carroll's staff at Oceanside where he served as defensive coordinator for six seasons, helping the Pirates to four San Diego section championships and a state title.

"I searched out this job when Del Norte first opened (in 2010), but there was a hiring freeze and it didn't work pout," said Coleman.

"But I liked the vision of the school and the Poway Unified District. So I always kept an eye on the school."

Coleman coached and taught art at Oceanside, but said he was caught up nearly every year in the teaching layoff cycle.

So he applied for a job in the Poway district, got the job and was assigned to Del Norte.

The father of one, Coleman and his wife own a copy business and have a home in Del Sur, minutes from school.

"Not coaching last year, I realized the game is in my blood," Coleman said. "I went to Oceanside games, went to Del Norte games, and I missed coaching. I realized my passion was teaching and coaching.

"I was able to refocus and planned to be ready for the next opportunity."

Cole left Del Norte after four seasons, going 21-25. He is now an assistant coach at St. Augustine. Del Norte defensive back Quenton Meeks signed a letter of intent to play next season at Stanford.

"Jerry and Leigh did a great job building this program," Coleman said. I realize how hard it is to get a coaching job in North County.

"I cherish my time at Oceanside, working with John Carroll. But this is a totally different deal.

"I want to build on my experience with John Carroll and build tradition here."

Coleman played high school ball in Colorado and was recruited to play at SMU. But that was 1986 and the Mustangs were hit with the death penalty by the NCAA.

He then played football and lacrosse at Beloit College in Wisconsin.

"We're confident Patrick Coleman will be a great ambassador and leader for our football program," Giaime said. "We're thrilled to have him leading the Nighthawks and look forward to continuing to develop a competitive program."