Cherry is the freshman on top 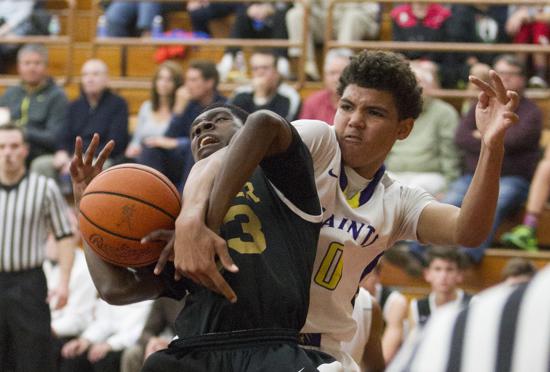 The 2012-13 freshmen class has turned out to be pretty darn good.

Bottomline, though, all are still playing, and all have star power.

"When it's all over, this freshman class could be as good as two years ago," said Aaron Burgin of FulltimeHoops.com. "There is star power at the top of this class and depth, too.

Right now, the best player in the 2018 class is 6-foot-7 forward Taeshon Cherry of St. Augustine.

Taeshon's father (Darnell) and mother (Danielle) starred at Point Loma Nazarene. Darnell was an NAIA All-American and is the women's basketball coach at Southwestern College.

And his maternal grandfather played football at Cal Lutheran.

So Taeshon has good genes and a solid fundamental background.

Long and athletic, he flopped around for the first few games of the season, but scored seven points in the fourth quarter of the West Hills Horsman Tournament championship game against No. 1-ranked Torrey Pines in December.

That was his wakeup call, and he has turned into a star on one of the top teams in San Diego.

"Taeshon's mother and father have done a great job with him because he takes coaching very well," said St. Augustine coach Mike Haupt.

One scouting report said Cherry has a presence on both ends of the floor. Can do it all ... score, rebound, block shots, get steals and pass the ball.

"We play him in the post, but his skill set translates to being a wing player because he can handle the ball and shoots it, too," Haupt said.

"Not many freshmen start for St. Augustine, so for him to be a starter on this team, tells you what we think of him as a player and a young man."

Cherry is surrounded by good players at Saints, players like Eric Monroe, an all-county selection as a sophomore, Martin Tombe, Otto Taylor and Josue Lara.

"We have a great culture at Saints," Haupt said. "The older guys take care of the young guys.

"There was never any isolation or freeze out of Taeshon because he's a freshman.

"So far, Taeshon is only getting mail from colleges," Haupt said. "But having had Trey, I can see interest in Taeshon will only grow.

"He could stretch out another two or three inches without losing his athleticism. So, yes, I can see him making the jump to being a college player."

Best point guard in this class and one of the tops in the county, is averaging 14.5 points, 3.8 assists and 1.8 steals a game. A good shooter, he has made half of his 98 3-point attempts. Runs the Panthers extremely well.

Long and lanky. Perimeter game is improving. Excellent shot blocker. Needs to add strength, but has the frame to add 30 pounds.

Great court sense, good shooter and hard worker. Team is struggling, so he gets overlooked, but is averaging 14.1 points, 4.0 rebounds, 1.6 assists and 1.8 steals a game. Perimeter game is evolving.

First man off the bench for the Titans. Hard worker, who has a good nose for the ball. Should grow and improve.

Quick with good court sense and vision. Very athletic, good shooter and has a quick first step. Is averaging 6.7 points, 1.5 rebounds, 2.7 assists and 2.3 steals a game.

Both players are starters for the Aztecs. Crawford is jet quick, but tiny. Still, he's averaging 8.9 points, 2.8 rebounds, 2.5 assists. Jurlina is a small forward, who is getting solid minutes, averaging 2.2 points and 2.4 rebounds.

A little awkward and lost at the start of the season, he's getting more court time and is emerging as a shot-blocking force. As he adds strength, matures and grows, Washington will be a big-time prospect.

Doesn't look like a player at first glance. But the more you watch him, the more you see there is something there. He averages 5.4 points, 6.3 rebounds and 4.3 blocks a game.

Was a starter early in the season, but is coming off the bench now that Quen Meadows is healthy. Still, you can see the athleticism and upside.

Both players are somewhat under the radar on a team with three top-notch seniors. But both are getting solid minutes that will pay dividends next season and beyond.

Young player on a team filled with juniors, who have worked together for three years. Is only averaging 3.2 points and 2.6 rebounds a game, but team doesn't need him to score. Fluid lefty, great passer and a high basketball IQ.

Was injured and missed a good part of the early season. Just now starting to get quality minutes. Quick with good vision. Runs the floor and can get out on the break.

Is being touted as a big-time football prospect. Starts on the basketball team and has shown some ability around the basket. Averages 2.2 points and 3.8 rebounds a game.