Sophomore at tiny Balboa City School is rated the No. 1 prospect in the nation 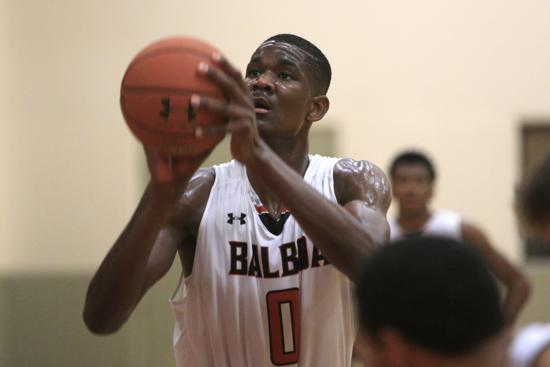 Balboa City School’s DeAndre Ayton, a 7-foot sophomore who came to San Diego from the Bahamas, is averaging 25.2 points, 17.3 rebounds and 4.6 blocks a game. He’s a “force to be reckoned with,” says his coach, Zack Jones.

The best high school basketball player in America, according to one scouting service, lives in San Diego, and it’s almost certain you know nothing about him.

DeAndre Ayton is hidden — as easily as you can hide a 7-footer — at Balboa City School, a 108-student, kindergarten-through-12 private school located on the fringe of downtown, where the sound of students bantering is interrupted by the roar of airplanes descending on Lindbergh Field.

Balboa City has not applied to become a CIF member, so when the San Diego Section playoffs begin next week, Ayton will not be on display. If he were, here’s what you’d see:

A 7-footer by way of the Bahamas so freakishly athletic he can shut down 6-2 guards. A 7-footer who can run the floor, pull up and bury 3-pointers. A 7-footer who dominates inside, swatting shots like a child might swipe apples off a low-hanging branch. A 7-footer who violently slam dunks, but is graceful enough to alter his shot in midair and kiss the ball off the glass.

Tweeted a hyperbolic Los Angeles sportswriter, “He could help the Lakers, right now.”

On the flip side, Ayton is a typical not-a-care-in-the-world 16-year-old who likes to draw, doodling buildings and landscapes. If the NBA doesn’t pan out, he could envision life as a chiropractor.

Ayton is a sophomore at Balboa City, averaging 25.2 points, 17.3 rebounds and 4.6 blocks against similar private schools and AAU teams. ESPN ranks him the No. 1 player in the high school class of 2017.

ESPN.com and former head coach at Wright State. “From (the free-throw line) on down, this guy can make a little jump shot, put the ball on the deck for one or two dribbles and has a sweet, soft jump hook.

“What we like most about him, he has a competitive spirit. When he starts to play against bigger, older and stronger guys he seems to embrace that competition.”

Last August in the Bahamas, Ayton played for a club team against a side that included players from the University of North Carolina. Ayton’s team won with the 7-footer scoring 17 points and hauling down 13 rebounds.

“He was a force to be reckoned with,” says Zack Jones, the executive director and basketball coach at Balboa City. “He was a matchup problem for those guys.”

Some scouting services list Ayton as 6-10 or 6-11, but Jones vouches for his 7-foot height.

The story about how Ayton landed in San Diego from the Bahamas depends upon who’s telling the story. Shaun “Ice” Manning is a connected San Diego basketball insider and, he says, founder of a youth developmental program called Ground Up.

“Guys send me kids from all over,” says Manning. “I’m a mentor. I feed them, take them to church, deal with their academics, turn lives around. I’m just doin’ God’s work.”

Manning says a friend spotted Ayton at a basketball camp in the Bahamas when Ayton was 13. That friend, says Manning, knew Ayton’s family and recommended that DeAndre move to San Diego to live with Manning.

“He came here because of me,” insists Manning, who says he has documentation that Ayton’s parents granted him legal guardianship.

Jones, who played basketball at San Diego State, says his wife and Ayton’s mother are friends and that Ayton’s parents wanted DeAndre to live in the United States to further their son academically and athletically. Ayton began attending Balboa City in the seventh grade. His athletic background at the time consisted of running down the right wing playing soccer. Or standing (very tall) as a goalkeeper. His basketball experience at the time: virtually nil.

Jones, who is assisted by former Hoover basketball coach Ollie Goulston, admits Manning was instrumental in initially coaching Ayton and developing his skills. Manning says he has since had a falling out with Jones.

“DeAndre knows who loves him,” Manning says. “They’re not about his life. They’re about how tall he is and how he plays basketball.”

Regardless of the he-said, he-said tale of Ayton’s arrival in San Diego, this much is certain: Kentucky, Arizona and local heavy San Diego State already have offered scholarships, according to ESPN. Other major programs like Duke, North Carolina and Kansas are sure to follow.

About once a month, Jones shows Ayton letters he receives from colleges.

“Hundreds,” says Jones, who limits Ayton’s exposure “so he doesn’t get distracted.”

Sitting in Jones’ meticulous school office, Ayton is slumped down in a plastic chair fit for someone maybe 5-11, definitely not 7 feet. He’s wearing the high school athlete’s typical attire: comfortable sweats, all in black. His size-18 feet extend beneath Jones’ desk. He’s asked if he misses playing at a traditional high school.

On being the No. 1-ranked prospect in America, Ayton says, “It feels good, but I can’t worry about that right now. I want to be No. 1 in college my senior year.”

That line draws a smile from Jones, the strong/silent type with a baritone voice fitting a radio announcer.

“Will he see his senior year in college?” Jones is asked.

“He’ll see his senior year,” Jones says, “but he won’t be playing basketball. It’ll be to earn his degree.”

One source close to a major Division I program says Ayton will be a one-and-done, off to the NBA after one college season.

Teammate Khamron Wells says Ayton is humble about his status.

“He doesn’t like to be treated differently,” Wells says. “He doesn’t get bigheaded. In school, he’s very serious about his work, always on-point. As a player, he’s great. He cares about the people around him. He shares the ball. He wants everyone to succeed, not just himself.”

Tyrone Hopkins coaches at Horizon Christian Academy — the same school Jones guided to two state titles — and has faced Ayton in summer leagues. He vouches for the 7-footer nailing treys. He admits Ayton defended his best player, a 6-2 guard.

“He locked our kid up,” Hopkins admits. “For a 10th-grader, the kid has a total game, right now. The sky’s the limit.”

San Diego has seen this can’t-miss, big-man prospect before. Save for injuries curtailing his NBA career, the story read well for Bill Walton. For Jeremy Tyler, not so much. Tyler starred at San Diego High seven years ago, then not only bypassed college but skipped his senior year in high school, eventually beginning a nomadic professional career.

The stops include Israel, Japan, China, NBA D-League outposts, plus 80 NBA games spread across four seasons with the Warriors, Hawks and Knicks. Tyler provides the cautionary tale, a 6-10 disappointment, if not a bust.

The thinking among insiders is that Jones is giving Ayton better insulation, better guidance.

Hopkins has watched Ayton in camps, patiently working with kids who will never lace up shoes in a high school game, much less be recruited.

“For a kid of his stature, he could have this big attitude,” says Hopkins. “I’m all this, all that. But he’s humble in all he does. He’s a great kid to represent San Diego.”

Maybe the only question about Ayton is that he’s so good, so big, so athletic that some question his listed age. He can’t really only be 16, can he?

“If you talk to him, get to know him, you find out he’s just a kid,” says Manning. “I have his birth certificate. I know his real age. That’s just people seeing positive and wanting to say something negative.”