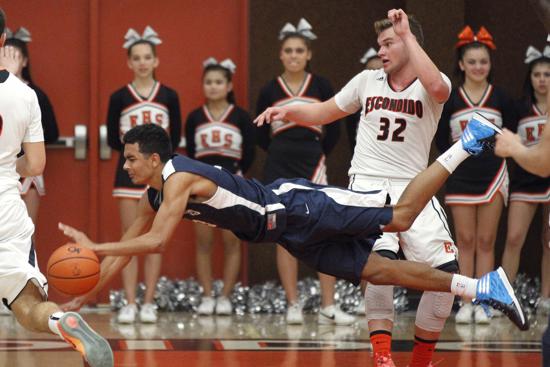 San Marcos' Johnny McWilliams (shown in an earlier game this season) led the Knights with 19 points in Friday's win over Mission Hills.

SAN MARCOS — The newest and largest gym in the county nearly wasn’t a match for what has become one of the most fierce rivalries in San Diego.

San Marcos students were dressed in camo. Mission Hills students donned Hawaiian wear, hula skirts and all. And it was beyond loud.

What the fans saw was a 19-3 San Marcos first-half run that set the Knights up for a 61-33 Avocado East League win.

San Marcos is assured of a spot in the Open Division. Mission Hills will play in Division I.

Mission Hills cut it to 10 early in the third quarter, but a two-point fourth quarter sealed the Grizzlies’ fate.

“This was beyond a playoff atmosphere,” said San Marcos coach Dante Carey. “This is one of the best rivalries in the county. Are you kidding, 3,100 screaming fans.

“If this doesn’t prepare you for the playoffs, I don’t know what will.”

Before Friday’s games are factored in, the Knights are fifth in the eight-team Open Division and would play at Army-Navy in the quarterfinals.

A one-spot jump to No. 4 would give San Marcos a home game.

“The Open Division is so tough, so home games are really important,” Carey said. “We want to get teams in here and have them experience this crowd.”