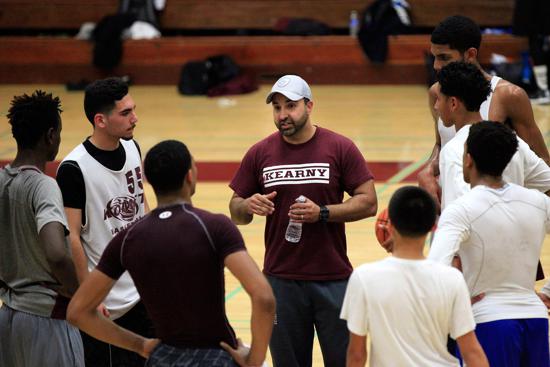 Kearny basketball coach Todd Ahwazi speaks with his team during a practice. The Komets, who won the San Diego Section Division III title last season, went 12-0 in the Central League this year, winning by an average of 25 points a game.

Scripps Ranch, Mt. Carmel and Foothills Christian are among the potential opponents for the Kearny High boys basketball team as it navigates its way through the section’s Division II playoffs.

But the biggest obstacle confronting the Komets is themselves.

“Selfishness,” said senior Xavier Browne. “We have a lot of talent on the team, so everybody feels like they should be the superstar. Everybody tends to show selfishness in some way or another. ...

“If everybody gets that maturity in them that it’s not about the points, it’s about the wins, then we’ll be fine.”

The winner meets the Fallbrook-Mt. Carmel winner, with top-seeded Foothills Christian likely looming in the semifinals.

The Komets won the San Diego Section Division III championship last season, guided by longtime coach and Kearny alum Carl Bronson. But his contract was not renewed following the season. At the time, Bronson said he was told by Principal Ana Diaz-Booz that “we’ve chosen to go another direction.”

New Kearny coach Todd Ahwazi is a physical education teacher at the school and former assistant coach for Bronson. Ahwazi’s task — like Bronson’s last season — is getting a talented group of individuals to play for the team rather than themselves.

The Komets won each of their 12 Central League games by double digits, prevailing by an average of 25 points a game. Kearny averages 70 points and employs an effective pressure defense.

Ahwazi said most of them are averaging in double figures, though he has not compiled statistics. He wants the focus on the team.

“We’ve got a lot of scorers and individuals and people trying to get their points,” said Perry Davis. “We’re realizing that we have to come together instead of playing for ourselves.

“We have to stay together as a team and not worry about who gets the glory.”

This isn’t a group that grew up playing together in the same neighborhood. The Brownes and Knox, their cousin, moved from Mississippi two years ago. The Davis brothers transferred this year from Madison, and Hassan Saleh transferred from Horizon.

Blending their talents and personalities has been the Komets’ biggest task.

“Then you have three family members on the court. They butt heads at times. They’re very strong, opinionated kids. But they play their butts off. They work hard.”

Spectators have seen the Komets argue heatedly among themselves on the court. They’ve seen players benched for not following rules.

One Komets player received a technical against Madison when he dunked during pregame warm-ups. The same player hung on the rim at the end of the game, resulting in another technical.

“We benched him for a game after that,” said Ahwazi.

The coach benched starters in other games throughout the season because of behavior issues.

The Komets worked well together in Friday night’s regular-season finale, an 80-54 victory over Point Loma. They found the open man with passes. They didn’t force shots. They backed up each other on defense.

“They look like they’re playing together,” Point Loma coach Chris Brisco said after the game. “They’re tall and athletic. All of them can dribble and shoot. They’re just good.

“They can probably win it all. It’s going to be tough, though, because they may have to play Foothills.”

A tight playoff game will provide the answer on how far the Komets have come as a team.

“It’s easy to be a team and have fun and high-five each other when you’re winning by 30,” said Ahwazi. “I want their mental focus when they’re in a close game. ... In close games we have a tendency to stop playing as a team and try to take over individually.”

“We have to stay as a unit. Everybody knows their role going into the playoffs. It’s either go hard or go home.”