Knights' Leaf puts on a show 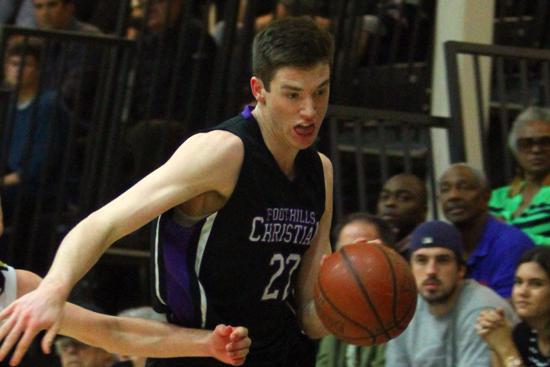 Foothills Christian junior T.J. Leaf scored in a variety of ways against Kearny.

RANCHO SAN DIEGO — Every place Kearny looked Wednesday night all the Komets saw were T.J. Leaf, whether it was inside, outside, in the paint or 3-point range. None of the defenses the Komets threw at the 6-foot-10 Arizona-bound Leaf were effective.

The Foothills Christian junior equaled his season high of 43 points as the Knights (23-7) eliminated Kearny (23-8) from the San Diego Section Division II semifinals 84-44 before a standing room only crowd at Cuyamaca College.

The outcome of the game was decided early in the second half, with the focus of the contest almost exclusively on Leaf. He dazzled the crowd with various spin moves including a dunk and three treys. He repeatedly took opponents off the dribble and made a whirlwind charge to the basket. It was his night and his game.

Leaf was modest, giving his teammates credit for feeding him the ball.

“I don’t really keep track of how many points I’m getting during a game,” Leaf said. “I get to about four and then I just play the game.”

It’s not all about scoring for Leaf, who grabbed a game-high 21 rebounds, blocked three shots and dished three assists.

Junior guard Nikko Paranada was a quiet co-star as he tossed in 19 points, the majority of which came on 12-for-12 free throw shooting.

“I knew I made at least 10 free throws, but I wasn’t sure exactly how many,” Paranada said. “I just play and let the game come to me.”

Omajae Smith made the most of his shots as he hit 4 of 5 from the floor, including one trey and 3 of 5 free throws.

Foothills Christian led 59-31 after three quarters. The Knights were in a smooth flow all evening. They will face Mira Mesa in Saturday’s Division II championship game at Jenny Craig Pavilion. Tipoff is 1:07.