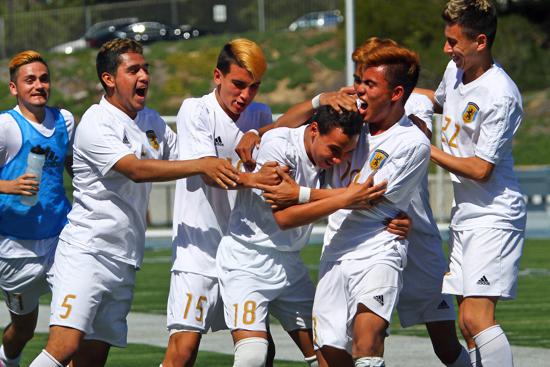 As time counted down on a scoreless tie in regulation, San Ysidro junior Hector Cruz got his wish in the San Diego Section Division III boys soccer final at Mesa College on Saturday.

Cruz received his first free kick and converted with a minute left to lift the top-seeded Cougars past La Jolla Country Day 1-0 for a repeat title in a move up from Division IV.

“All game, I wanted that,” said Cruz, who sent a curving shot high in the nets from just outside the right corner of the penalty box. “I got it, and I did it.”

Last month, the first-year varsity member also scored on a free kick to contribute to a 2-0 victory that enabled San Ysidro (15-3-4) to end a 12-year title reign by San Diego Southwest in the South Bay League.

“It took hard work by everyone,” Cruz said. “We’re like family.”

The No. 2 Torreys (17-5-5) received six saves from goalkeeper Ali Moradi, including a dazzling stop on a shot by Gustavo Andrade with four minutes to go.

La Jolla Country Day, which had two penalty-kick wins, went without a goal in three playoff games. This was the first final for the Torreys since 2010.