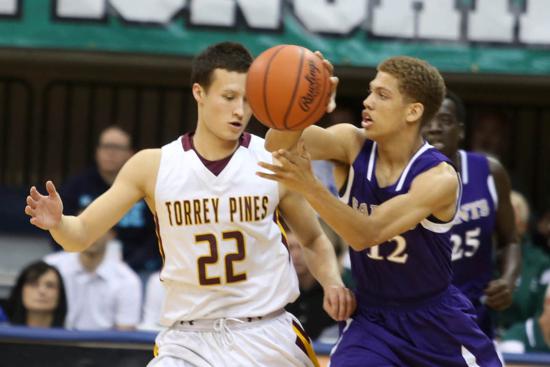 With the shot clock and game clock running down and in desperate need of a hero in crunchtime, St. Augustine found one in junior Martin Tombe.

With a defender in his face, Tombe turned on the wing and hit nothing but the bottom of the net with a 29-footer. He was fouled on the play and made the free throw with 20 seconds left to play, propelling the Saints to a 46-42 win over Torrey Pines to claim the San Diego Section Open Division title Saturday at Jenny Craig Pavilion.

For good measure, Tombe grabbed a defensive rebound on the other end of the floor after a Torrey Pines miss and sank both free throws with 4 seconds remaining.

“I think all my shots are going in,” said Tombe, who finished with a game-high 19 points. “I didn’t see that one go in.

“I just saw everyone jumping around. To be honest, the free throws at the end were tougher because it closed the game out.”

Neither team led by more than five points in the game.

In the fourth quarter, the game was tied or the lead changed hands 12 times — on all but two scores.

“That was like a college game,” said St. Augustine coach Mike Haupt. “It was a grind all night. I figured it would come down to the last score, and it did.

“Tombe has been locked in for a while now. He has the green light to take a shot like he hit.”

Sixth-seeded St. Augustine (25-6), a Division IV team in the state, stretched its winning streak to seven.

St. Augustine will most likely represent San Diego in the Open Division of the SoCal Regionals.