Watch for Lions Tournament, wave of new coaches and some well-known names 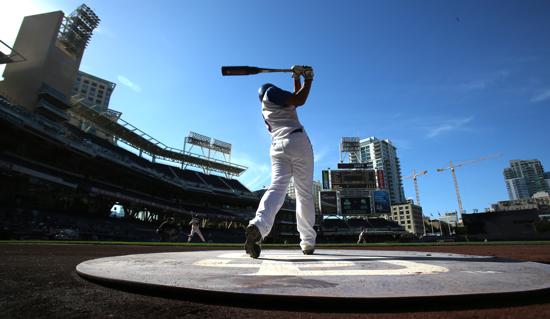 La Jolla Country Day is led by the Weisz triplets — Chandler, Keaton and Zach — and all plan to play in college. Chandler, a catcher, is headed to Saint Mary’s. Keaton, a pitcher-second baseman, is headed to Arizona. Zach, who plays the same positions as Keaton, will play at Cal State Fullerton.

Quarterback Matt Romero, who threw for more than 2,000 yards and led Oceanside to a 14-1 record and a San Diego Section Open Division football championship, is going to give baseball a try after two years away from the game. A pitcher, he has an outstanding cutter.

Poway infielder Tyler Nevin, who sat out last season with an elbow injury, is the son of former Padres slugger Phil Nevin. Phil Nevin was the Golden Spikes Award winner at Cal State Fullerton in 1992 and was picked first in the draft by the Houston Astros. He went on to hit 208 big-league homers and now manages the Reno Aces in the Arizona Diamondbacks system. Scouts say Tyler Nevin has a beautiful right-handed stroke and could be a high draft pick. He has signed to play at UCLA.

Jordan Abruzzo was prepared to focus on his full-time job and family when he resigned at El Capitan, his alma mater, last summer. That lasted all of two weeks, when his wife Katherine was hired as a school psychologist at Grossmont at the same time the Foothillers were looking for a baseball coach. “It wasn’t a situation where I was leaving El Capitan for Grossmont,” Abruzzo said at the time. “I love El Cap and have a lot of respect for the program. Grossmont offered my wife a job there and it all fell into place.”

Canyon Crest, which played all of its games on the road last season, is moving back to campus and will play at a new facility. In addition, as part of a campus redo, San Marcos has a renovated field.

Olympian’s Taj Dawson hit .462 last season and stole a school-record 36 bases. He has his eye on 40 this season.

Not only is Canyon Crest shortstop Alex Rejto a good player, he’s also a force in the community. Noticing the La Costa area didn’t have a Challenger League, and not willing to wait for Little League Baseball to give its approval, he started a Miracle League for challenged young players. He does everything from designing uniforms to making up goody bags.

The 65th annual Lions Tournament is set for March 30-April 2. The 132-team event will be played in eight, 16-team divisions. The Classic Division features No. 1 Rancho Bernardo, No. 2 Cathedral Catholic, No. 3 La Costa Canyon, No. 4 Granite Hills and No. 7 St. Augustine from San Diego. The top out-of-town teams include Green Valley of Nevada, Moorpark, Bishop O’Dowd of Oakland and El Camino Real.

The City Conference and North County tournaments start March 23. The City Conference Eastern Division championship is April 11 at 10:30 a.m. at Cathedral Catholic. The Western Division title game is set for 10:30 a.m. April 11 at Madison. The 24-team North County Tournament features 65 games over 11 days. The championship contest is at 6:30 p.m. April 10 at Escondido High.