Dons senior a standout from the start 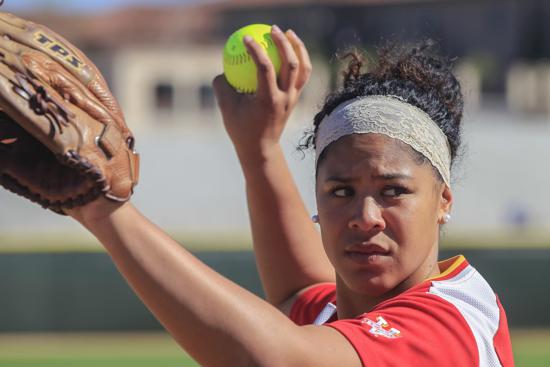 In the fall of 2011, when her mom pulled up to drop off Sarai Niu for her first day at Cathedral Catholic, the freshman didn’t want to get out of the car.

Niu wasn’t sure this was where she wanted to go to high school.

Tierra Falo was the only person she knew on the Carmel Valley campus. The lifelong friends were softball players, but that didn’t matter. The introverted Niu still had doubts.

“She knew Tierra and that was it,” Dons softball coach Margaret Mauro said.

Her fear subsided enough for her to come back for Day 2. Niu, who graduates this spring, has been tearing up opposing pitchers ever since.

A first-team All-San Diego Section performer last year, Niu was one of the driving forces behind Cathedral Catholic’s Division I championship in 2014 courtesy of a 6-1 victory over Ramona in the finals to cap a 29-3 season.

Not only did she provide power in the middle of the lineup — she hit nine homers while Falo slugged six of the team’s 20 — her 54 hits drove in 52 runs.

Niu may have been nervous about school, but she’s never hesitated on the softball field.

She’s started all 98 games during her time as a Don, even though she was certain she was headed to the junior varsity as a freshman.

“I was just trying to make any team,” said Niu, who will play next at Mississippi State. “When coach told me I made varsity, I cried.

“I was a little shocked and a little relieved. The starter from the year before was back, so I figured I was headed to JV.”

Mauro immediately pushed her potential slugger up to the varsity.

“She wasn’t ever a diamond in the rough,” Mauro said. “Some freshmen possess the mentality to do that. Sarai did.

“For a freshman to be on varsity, she has to play. I’m not bringing her up to sit on the bench. She got all the reps she wanted during tryouts and by the end it was obvious she’d made the team.”

Fearing she was becoming too much of a pull hitter, Niu started driving outside pitches the other way as a junior. Her average soared to .495 and there was even more power with the nine homers.

“I know I hit a lot of homers, but I love RBIs,” said Niu, whose full name is Sarai Seue Alemanafalenaouti Niu. “When I started playing I couldn’t hit and it took me forever to learn how to throw. The first time I hit in a game I went to the left-handed batters box because that’s where the previous hitter was.

“I hop on any inside pitch, but I figured out once I started going the other way the pitcher had fewer options. I do still try to hit those pitches over the fence in right.”

Niu got a bit of a late start this season after undergoing surgery in January to remove an ovarian cyst that she said was the size of a grapefruit.

She could not throw a ball or swing a bat for almost seven weeks.

Still, while waiting for the doctor’s clearance to play softball, Niu found no trouble getting out of the car each day for school.