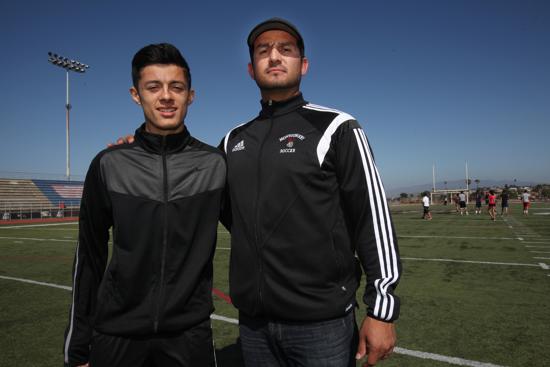 Johan Rodriguez was happy when he heard that Gaston Vazquez was named the boys soccer coach at Montgomery High last year.

“I was excited because since he worked at the school (as a math teacher) we knew he was the kind of guy you could talk to, even about personal problems,” said Rodriguez.

He knew also that Vazquez was the cross country and track coach, so he expected to run a little.

“It was horrible,” said Rodriguez, a junior forward who scored a team-best 17 goals in helping the Aztecs to the section Division IV title. “As a team we’d run a mile and we had to all finish under six minutes or we all had to do it again.

“We also had to run 120s (120 yards) under 30 seconds and again, we did it until everyone was under 30. What that did was not only get us in great shape, it made us help and encourage the players who had trouble making those times.”

“At first it seemed impossible,” said Vazquez. “I sent the word out that I was the new coach, and we were starting from scratch. I wanted anyone who wanted to play soccer and every position was open.

“We had 50 players at a meeting and then 70 showed up to try out. We finally got it down to 22 players and only one player quit because he thought he wouldn’t play. I told them the best 11 would start no matter what, and they’d play the whole game, so they had to be able to run.”

And run they did, at first doing it because the coach assured them that later in the season a well-conditioned team would be able to finish strong every game. It wasn’t until they won the Grossmont Tournament that the team saw the benefits play out on the field.

There would be no more questioning the running.

“I’m the captain so I had to feel and look confident going into the game but I was nervous,” said the recently-turned 17-year-old. “Running works and you could see it at the end of most games that we were able to keep going.”

With a 16-7-6 record, Montgomery is certain to move into Division III next season, and that was one of their goals.

“Just look at the great teams down here like Southwest,” said the coach. “We have the same kind of players they do so there is no reason we shouldn’t be able to be a Division I or II team. I like the playoffs the way they are because we have a chance to keep moving up.”

As for Rodriguez, he knows exactly what he’ll be doing the rest of this year and next.

“I play for a club team, Albion, and I will keep running with them,” he said. “And then next fall I’m going out for cross country and I’m going to try to get some of my teammates to run, too.”