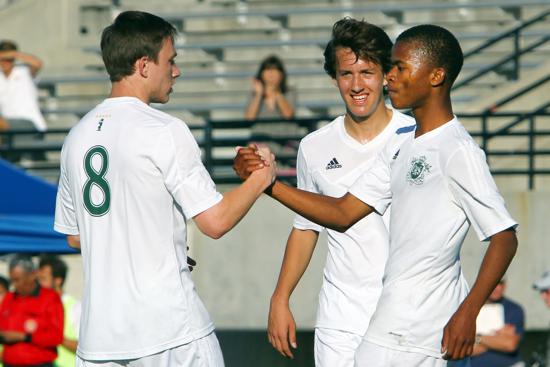 Coronado’s Anthony Chonga (right) is congratulated by teammates Sean Aucoin (left) and Alvaro Martinez after Chonga scored one of his three goals for the Islanders, who will play for the SoCal Regional Division IV title Saturday.

With a move to the San Diego Section Open Division this year, Coronado junior Anthony Chonga and his teammates saw a quick end to their school’s four-year title reign in boys soccer.

However, by regrouping instead of retreating, the Islanders are now in position for their first Southern California Regional championship while making their fourth appearance in the tournament’s eight years of existence.

Chonga recorded his second straight hat trick to lead the top-seeded Islanders to a 7-0 semifinal victory over visiting Newport Beach Sage Hill in Division IV play on Thursday, following up on their first regional triumph in the opening quarterfinals.

“We were really unhappy that we lost (in the section tourney), and that woke us up,” said Chonga, who has a team-high 18 goals on the season. “We decided as a team to play better. Just play together, work together and win together.”

Coronado (18-6-1) will host the final on Saturday against No. 2 McFarland.

Senior Max McKee added his first two-goal game of the season against the No. 5 Lightning (14-10) as the Islanders attack provided an encore coming off a 9-1 quarterfinal win over Rancho Mirage.

“It’s a bit surprising (to see the high scores), but on the other hand, we’re putting away our chances,” said McKee, who increased his season total to seven goals. “We weren’t always doing that early in the season.”

In the section playoffs, the Islanders fell on penalty kicks to eventual champion Cathedral Catholic after moving up from Division II. It was the only defeat in their last 17 games (15-1-1).

Despite the setback, Coronado drew the top seed for its SoCal bracket, based on enrollment rather than competitive level as in the section.

“This is exciting,” Chonga said. “We want to make history here.”

Diego Ochoa opened the scoring in the third minute for the Islanders, who built a 3-0 halftime edge. Matt Shirey also scored for Coronado in the second half.

In Division I, sixth-seeded Chula Vista traveled about 350 miles north and made the trip pay off with a 1-0 victory over No. 2 Clovis Buchanan. The journey isn’t over for the Spartans (18-3-6), who will play at No. 1 Woodland Hills El Camino Real for the championship on Saturday.