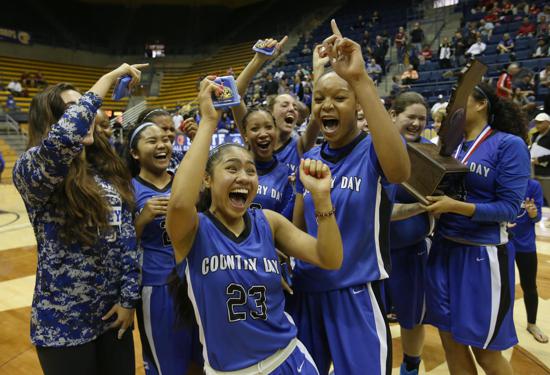 BERKELEY — La Jolla Country Day wasn’t going to be denied again, not this time. Not with Alaysia Styles making her presence felt in the paint.

Eastside (25-6), though, was able to hang around despite a scoring drought that lasted nearly eight minutes — mercifully ending on a 3-pointer that tied the game at 32-all with 4:18 to play.

“They’re a great team,” Eastside coach Donovan Blythe said. “Most teams, we usually can get to the hole with my guards and finish. But they were so long.”

Country Day coach Terri Bamford pointed to a change on defense made by the Torreys that made a significant difference.

“We tried to guard them man, and they’re too quick,” said Bamford, whose team was making its eighth appearance in the state finals. “So we went to that 3-2 matchup zone and the top was supposed to stop the dribble penetration. And when they got loose, Alaysia was back and really did a great job of timing and blocking shots for us.”

The Torreys reclaimed the lead with 3:06 to go on an acrobatic layup by junior Marianna Ecija, who scored a game-high 14.

Then it was just a matter of holding on, with 6-foot junior Mai-loni Henson running the show from the top of the key.

“I knew I had to have the ball in my hands for us to be successful,” said Henson, who was held to two points but found a way to contribute with eight rebounds and six assists, including a lob into the post for the eventual game-winning basket by Styles with the shot clock about to run out and 30 seconds left.

“If I could get to the basket, I would go. If not, I would find someone else. And I found her. I knew she would be there for me, and I was just thinking, ‘Alaysia, just make the layup. That’s all you gotta do.’ ”

With Country Day leading 38-34, the game was far from over. Eastside hit a jumper to cut the deficit in half, then fouled to send Isabel Aguirre to the free-throw line for a 1-and-1 with 6.8 seconds left.

“I looked down the bench and I looked at my senior and I said, ‘Can you make these free throws?’ And she said, ‘I can make them,’ ” Bamford said.

Aguirre acknowledged the pressure but said she received great advice from Kelsey Plum, point guard for the Torreys’ 2012 championship team who was in attendance.

“My coaches helped and Kelsey was telling me to smile,” Aguirre said. “So I calmed down and I was able to make them.”

When the final buzzer sounded, the Torreys stormed the court, bookending the careers of Aguirre and Cydney Collins with state titles.

Added Henson: “Hopefully we’ll keep the tradition going for the next couple of years.”