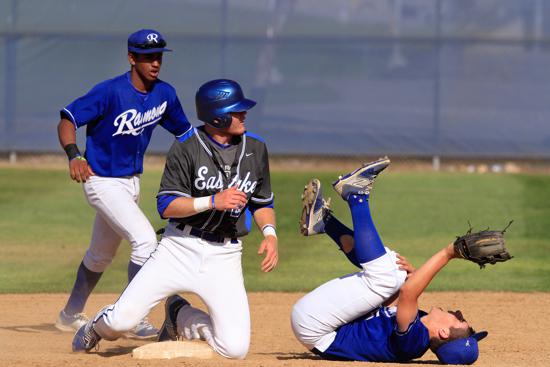 Ramona infielder Adrian Collazo is shaken up as Eastlake’s Jack Sandberg slides into second base. Collazo stayed in the game Wednesday, the final day of pool play in the Lions Baseball Tournament.

Eastlake rallied for a 6-4 win over Ramona on Wednesday in the 65th Lions Baseball Tournament. The victory advanced Eastlake (11-1) to today’s Premier Division semifinals against Grossmont at 9 a.m. San Ysidro plays Torrey Pines in the other semifinal at noon, with the winners facing each other for the division title at 3 p.m. All the games are at Eastlake.

Sandberg, a 6-foot-3 senior who bats left-handed, has been among the leaders for the Titans this season. He’s hitting .410 with nine RBIs. Sandberg’s first two homers of the spring came this week in the Lions, helping Eastlake to victories in the first two games of the tournament.

All these games have been a good thing for Sandberg. It’s kept his mind occupied as he waits for word on an appointment to the U.S. Naval Academy. He expects to find out any day.

“He’s a very smart kid,” Eastlake coach David Gallegos said of Sandberg, who carries a 3.7 GPA. “He takes in everything you tell him and works hard.

Part of the process for gaining an academy appointment includes being nominated by someone in Congress.

Sandberg said he is more comfortable facing a pitcher throwing 90 mph than he was being interviewed by Rep. Susan Davis of San Diego’s 53rd District. But Sandberg said the interview went well.

“I told her it would be an honor to go there,” Sandberg said. “I’m pretty young, but I consider myself a patriot.

“My mom and dad both served, so I want to continue the tradition of going into the Navy.”

Sandberg’s father, Matt, is a retired commander who served 21 years as a helicopter pilot. His mother, Kim, is a captain in the reserves.

Sandberg is interested in mathematics and science and his dream is to become a Navy fighter pilot.

“It’s a great education and a guaranteed job after you graduate,” he said.

It doesn’t hurt that Sandberg also can hit a baseball, though he is surrounded by solid hitters in the Titans lineup.

Against Ramona, senior catcher Dean Nevarez opened the scoring for Eastlake in the first inning with a two-run homer to deepest center field. Sophomore third baseman Ben Ramirez completed the scoring in the sixth with a two-out, two-run single that broke a 4-4 tie.

That rewarded Eastlake right-hander Adolfo Villanueva with a victory for 4 2/3 innings of one-run relief against Ramona (3-8).