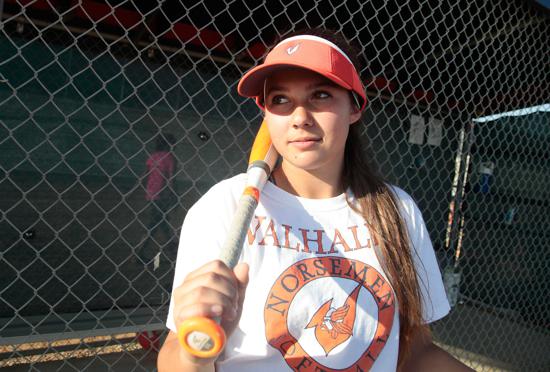 Kennedy Labshere, who plays third base and hits third in the batting order, is the only freshman in the starting lineup for Valhalla.

More often than not, when freshman Kennedy Labshere walks to the plate, her gaze ventures to the right field fence.

There, she sees a banner right where her sister, Madison, hit a rare walk-off home run when she played for Valhalla in 2013. Naturally, she’d like to add her name to that outfield wall one day.

“My sister has had a big influence on me,” Labshere said of Madison, who is now playing for the University of Virginia. “It was the way she did things, always finding a way to improve. She was hard on me, sort of like a coach, but she was just trying to get the best out of me.”

The only freshman in the starting lineup, you might expect her to be batting eighth or ninth while trying to adjust to high school pitching. Instead, she’s third in the batting order, living up to the expectations of providing key hits and power.

Starting this week, Kennedy was batting .463 while leading the team with two homers and walks with seven. She has scored 14 runs and driven in 19.

The similarities to her sister are so dramatic that both coach Mark Obney and her teammates can’t help but notice.

“Madison — I mean Kennedy — is so down to earth and humble,” Obney said. “When we had tryouts, there were three or four girls at third. They quickly realized she was the best one and moved to other positions. She has the same kind of power and plays the same way as her sister.

“She has stepped right in and was the MVP of the Serra Tournament, where she hit two home runs.”

Katie Schmidt, a senior who played on the team with Madison, said the similarities are uncanny.

“Talking to Kennedy is like talking to Madison,” said the team’s right-fielder. “Her batting stance, the way she plays third base, her body language is just like Madison’s. She’s a fun one, too. We joke around a lot on this team and kid each other. She joins right in.”

A freshman trying to wedge her way onto a fairly veteran team might be resented, but Schmidt said there was no problem with Kennedy.

“Because she was Madison’s sister, everyone assumed she would be a great hitter,” said Schmidt. “We try to take the tension off of her because she’s a freshman, but she fits right in. I think the fact we’re doing well hasn’t hurt.”

The Norsemen started the week 13-3 and ranked 10th in the section, winning eight straight games.

“Those sports are fun and I wanted to play,” said Kennedy, who has a 3.8 GPA. “But softball is my sport — it has been since I was 6. When I was 10, I was on a Navajo All-Star team that finished second in the nation. I think that made me a better player because I don’t want to finish second ever again.

“My sister helped give me the attitude that no matter how well I play, I can always do better.”

Kennedy has a slight advantage in that she has a batting cage in her backyard and daily takes swings. If she wants to work on a certain pitch — high, low, inside, outside, she just adjusts the pitching machine in the cage.

She wants to be ready if, and when, the situation arises where she just might be able to join her sister on the outfield fence by hitting a walk-off homer.