Volleyball, not baseball, is Kile's sport 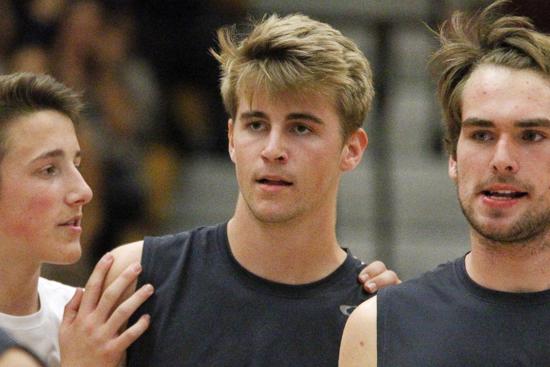 You'll have to forgive Kannon Kile if the memory of his father's sudden death nearly 13 years ago is a bit clouded.

After all, Kannon was just five when St. Louis Cardinals pitcher Darryl Kile, then 33, died of a heart attack in a Chicago hotel room hours before he was scheduled to start against the Cubs in Wrigley Field.

Kile had a 90 percent blockage of two coronary arteries.

Darryl Kile was a star, a three-time All-Star, a 20-game winner in 2000 with 133 career victories. He was at the peak of his career, and his death stunned the baseball world.

Five days before he died, Kile went 7 2/3 innings on the night long-time Cardinals broadcaster Jack Buck passed away at 77 after a long illness.

The Cardinals won that night and climbed into first place in the NL Central.

Just days after Darryl Kile's death, Kannon - dressed in his father's replica jersey - threw out the first pitch at a Cardinals game against Milwaukee in Busch Stadium.

The photo captivated the nation.

"I really don't remember much about those days," said Kannon Kile, who has a twin sister Sierra. "I knew my dad was a baseball player, and when he died, I knew something was different.

"But he was gone a lot during the season, so at first it wasn't really that big a deal.

"My memories are kind of fragmented. But I remember we had a warm, happy family."

And what about that day on the mound at Busch Stadium?

"I remember it was a big deal," he said. "I remember there were a lot of people. But I couldn't tell you if I threw a strike or threw the ball over the backstop."

Kannon Kile is grown up now.

And like his father, Kannon is a star athlete.

Volleyball, however, is Kannon's sport.

"We named him Kannon because I like the sound of Kannon Kile. I like that his initials would be KK and in baseball K stands for strikeouts.

"But he found baseball boring.

"A tiny bit of me wanted him to be like his dad, but I also knew he had to be his own man."

Kannon, along with Judson Ham and Zach Thomsen, are the men for the Torrey Pines boys volleyball team that is ranked No. 19 in the state by MaxPreps.

"I was a basketball player and really liked the sport," Kile said. "That was my primary focus. My focus was to start on the varsity at Torrey Pines as a sophomore.

"But in the eighth grade, a friend asked me to go to a volleyball clinic.

"Then I went to a tryout.

"I fell in love with the speed and tempo of the sport. I loved that you have to play as a team to succeed.

"And I loved the fact I could jump and hit the ball hard."

Kile is a full-rotation player. Meaning he plays the front and back row.

He rarely leaves the floor.

He was the Palomar League Player of the League last season.

"But he is the most-consistent player we have. He doesn't make mistakes.

"He'll get his 15-25 kills depending on the match. He's our captain. He has the respect of our team."

Kile has his eyes on the future, but only 23 NCAA schools play Division I volleyball.

So he's looking at UC Santa Cruz and Concordia-Irvine.

Santa Cruz is an NCAA Division III program. Concordia competes in the NAIA.

Sierra Kile is headed to TCU to play sand volleyball for the Horned Frogs.

"I'd like to play college volleyball and get into the financial field," Kile said. "My father, Dave (Jensen), has been a big influence on me. I see how he invests in things, turns things around, and I'd like to get into that kind of work too.

"I don't want to work behind a desk."

Darryl Kile grew up in Corona, but when Kannon and Sierra were in kindergarten and Ryker - the couple's third child - was a baby, Darryl's agent, Barry Axelrod of Encinitas, suggested the family look for a home in the San Diego area.

"Darryl has kind of hoping he'd sign with the Padres as a free agent, and we'd live in San Diego," Flynn Jensen said.

"On Barry's suggestion, we bought a home in San Diego, but Darryl died before we moved in.

"Dave lived near us. I met him three years after Darryl passed.

"Dave has been such a blessing to the kids. He adopted them and considers them his own.

"Like Darryl, Kannon is just a nice kid, a very accepting kid.

"He decided a while back that he was going to move forward.

"Life is too short, There is no point in looking back."