Nearly a no-no for Torrey Pines 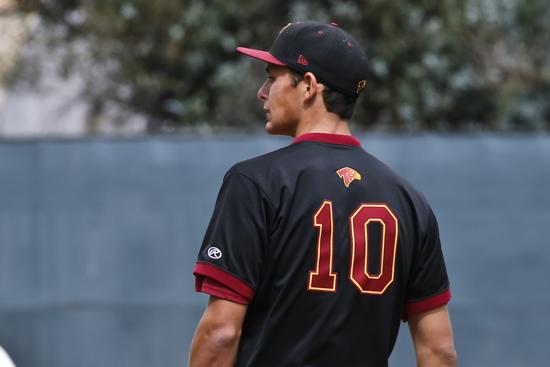 If it hadn’t rained for two days. If the usually rock-hard infield hadn’t been softened, Josh Sidney might have been celebrating a no-hitter Saturday afternoon.

Instead, the Torrey Pines junior right-hander had to settle for a one-hitter when Jacob Sclar’s full-swing infield roller with two outs in the seventh inning went for a hit.

Third baseman Jake Singer charged, fielded Sclar’s ball cleanly and made a strong throw. Sclar was safe by a step.

“If the infield was harder, maybe the ball bounces higher and gets to Singer quicker,” said Torrey Pines coach Kirk McCaskill. “You don’t get many chances — at any level — so you hate to see it slip away.”

McCaskill pitched for 12 years in the big leagues and had two one-hitters, losing a no-hitter in the ninth in 1989 with the Angels when Nelson Liriano of the Blue Jays doubled.

“That really was my ball,” Sidney said of Sclar’s tapper. “But I was trying to gas it up and fell off to the first-base side, and took myself out of the play.

“I’ve never had a no-hitter at any level. Not even Little League.”

Sidney, whose fastball sits at 83-84 mph and touches 87, struck out the side in the first inning. That’s when he said he knew he had a chance at something special.

He retired the first 15 hitters before hitting Sclar with a pitch in the fifth.

Shortstop Ryan Bramlett went deep in the hole and made a strong throw to save the no-hitter in the second. Right fielder CJ Stubbs was playing shallow and robbed MJ Metz of a hit in the fifth. And center fielder Sandy Plashkes raced deep in the left-center alley to flag down Alex Maloney’s drive.

"This is a pitcher's park," said Canyon Crest coach Mike Hymes, an All-CIF outfielder at Torrey Pines in 1996. "The wind blows straight in from right and even more so with the construction.

"The right fielder was like a softball rover on Metz's ball.

"But their kid threw great. Take nothing away from him. All you can do is tip your cap."