Triplets ready to find their own way 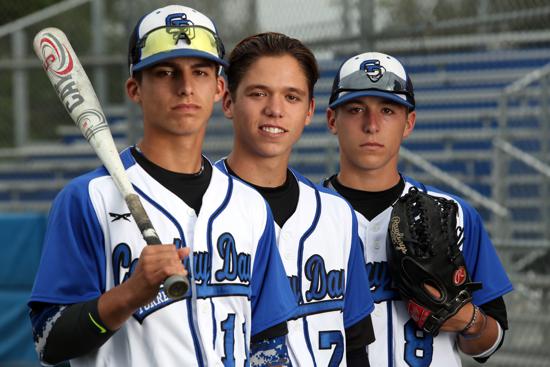 When Jonathan and Kimberly Weisz’s triplets – Zach, Keaton and Chandler – were young and showed an interest in baseball, Jonathan decided to play them up the middle.

That’s not to say the fraternal triplets don’t have their moments.

“They’re like any set of brothers,” said Jonathan, a sports agent. “For the most part, they get along great, but they’re very different.”

So breaking up the trio after high school doesn’t bother them.

Zach, who is hitting .203 with nine steals, is headed to Cal State Fullerton.

“I’m very baseball oriented, so Fullerton is the best fit for me,” Zach said.

LJCD coach John Edman said Zach, who hits seventh in the lineup, throws well and runs most everything down in center field.

Keaton, who is hitting .325 with nine steals, will play for coach Andy Lopez at Arizona.

“I wanted a college that plays great baseball, but also has the big three sports – football, basketball and baseball,” Keaton said. “I visited the campus, and fell in live with it.”

Edman said Keaton, the team’s leadoff hitter, makes the play in the hole at shortstop as well as anyone.

Chandler, who is hitting .232 and has thrown out seven of 15 base stealers, is headed for Saint Mary’s.

Edman said no one seems to outrun Chandler, the team’s eight-hole hitter.

“I’m the most academic oriented, so I was looking for a school that combines academics and baseball,” Chandler said. “Saint Mary’s has a great baseball program, and the business school is among the best in the country.

“I’d like to stay in baseball when my playing days are over. Maybe be a general manager.

“So I’ll take math classes and get ready to crunch some numbers.”

The numbers add up pretty well for the Torreys.

The Torreys finish league play with games Wednesday at Horizon and Thursday at home against Bishop’s.

LJCD took two of three from SFC, so a tie means the Torreys would be designated league champions for seeding purposes.

Plus, the Torreys are currently No 7 in the power rankings, meaning they would be in the Open Division for the playoffs.

“Our goal all along has been to win the Coastal League, then play for a CIF championship,” Zach said. “Sure we’re a small private school. But we want to play with the big boys – La Costa Canyon, Rancho Bernardo, Cathedral Catholic, Torrey Pines and the like.”

Rivas lives with the Weisz family in Poway, where the triplets would have gone to school had they not chosen La Jolla Country Day.

“We’ve had a lot of twins on the team over the years, but never triplets. It’s funny because they have their own personalities.

“They have a lot of the same friends, but they’re not all in the same groups.

“Because they play different positions, and not every college is looking for a catcher, shortstop and center fielder in the same year, we saw a split after high school.

“They’re not always together like a lot of siblings. But it’s very clear they love and respect each other.”