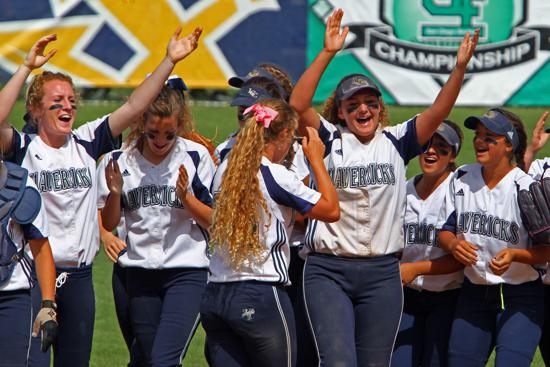 Virtually every day for the last four years, senior Samantha Smith has stared at the softball championship banner from 2001 that hangs on the wall of the clubhouse at La Costa Canyon.

That’s the last time the Mavericks have been champions.

Until now, after the No. 1-seeded Avocado West League winners got a four-hit complete-game pitching performance from junior Shannon Hennessy and Smith’s two-run single for a 2-0 victory over No. 2 Granite Hills to win the section Division II crown on Saturday at UC San Diego.

“This is pretty exciting,” Smith said. “I’m pretty much on top of the world.

“We needed to get a new banner to go with that last one. If I can’t be there when the new one goes up, someone better email that whole ceremony.”

The third inning looked like it was over before it started for La Costa Canyon. After a pair of strikeouts, an error opened the door. A bunt single by Megan Ruiz and a walk to Bailey Romano loaded the bases for Smith.

Smith’s single up the middle chased home both runs, giving her 28 RBIs this season.

“I’m in that position because the coaches have faith in me to come through,” Smith said. “She was pitching me outside, so I was looking for something out there. I just wanted to drive it where it was pitched.”

Hennessy, the league’s Pitcher of the Year, allowed just one runner to reach scoring position the rest of the game, finishing with one walk and one strikeout to improve to 21-4.

“I told the girls it’s all about execution,” La Costa Canyon coach Jeanne Bass said. “That’s what wins games like this.

“We scored those runs and I was relieved because that’s all we needed for Shannon.”

And all of the other Mavericks waiting for a new championship banner.