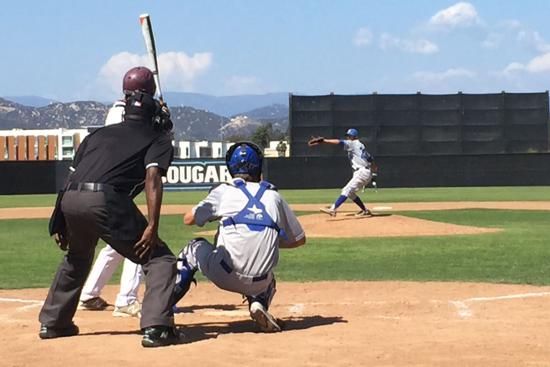 Now the Cavers were three outs away from ending it. What were a few more minutes in the scheme of things? Excruciating, as it turned out.

San Diego senior left-hander Jagger Acosta escaped a bases-loaded jam in the seventh inning of the Division IV championship Saturday at Cal State San Marcos, giving the Cavers a 3-1 win over Bishop’s for the school’s first championship since 1966.

“I’m real proud of these boys,” said first-year coach Will Mercado, a 2001 San Diego High graduate. “If you asked anyone if we would be here, people wouldn’t believe it. ...

“I just threw strikes and did what I had to do,” Garcia said. “This is crazy. It’s an unbelievable, once-in-a-lifetime opportunity.”

No. 4 San Diego’s Jason Amberg broke a 1-1 tie in the fifth with an RBI single. Teammate Martin McLane drove in an insurance run an inning later for the Cavers (22-11).

It was left to Acosta to get the final six outs. His defense helped him in the sixth, turning an inning-ending double play.

In the seventh, Acosta allowed a one-out single and then walked the next two batters to load the bases. He got a tapper back to the mound for the second out on a force at home, then a strikeout to set off the celebration.

“I had a blast,” Acosta said after emerging from the dog pile on the mound. “This being my last game, I wouldn’t ask for a different way to end.”