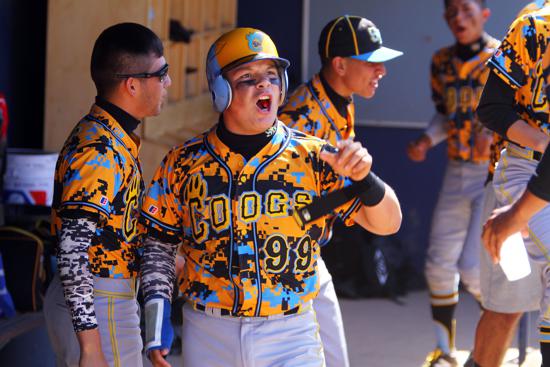 It was only the second inning, but Gilbert Suarez knew it was a key point in the game.

So the San Ysidro senior pitcher “started using my legs more” and wiggled out of a bases-loaded, no-out jam with a pair of strikeouts and a comebacker.

The San Ysidro offense scored multiple runs in three different innings to back him up, and the Cougars beat La Jolla 7-2 Saturday to win the San Diego Section Division II championship at USD’s Fowler Park.

“I was in that situation another time in the playoffs,” Suarez said of bases load and no outs. “I got a double play to get out of that, so I wasn’t nervous.

“I was thinking ‘push off the rubber, keep the ball down. Let your defense work.’ ”

“We super glued the cut, but it started to bother him about the third inning,” Canche said. “He was at 108 pitches after five innings, so we went to Herman Alvarado to close it out.”

La Jolla also loaded the bases in the fifth but managed just one run.

“We didn’t score and San Ysidro scored three in the third, so that was a huge momentum swing,” said La Jolla coach Gary Frank. “They took advantage of their opportunities.

“We pride ourselves on winning the freebie war. And we didn’t do that.

“I’m proud of our effort, though. We lost to a very good team.”

Three La Jolla pitchers walked four and hit one. Three of those “freebies” scored. The Vikings also made two errors with one of those costing a run.

Edgar Lopez drove in a pair of runs for the Cougars while Conrado Diaz and Suarez each scored twice.

Alvarado threw two scoreless innings in relief of Suarez, thanks to a great diving stop and throw by shortstop Andres Alvarez to leave a runner in scoring position.

Noah Strohl opened the La Jolla seventh with a double, but a pop up and two ground balls later, San Ysidro had its second championship since 2013.

“We led the county in wins and runs scored,” said Canche, who pointed out the Cougars beat all the Division I semifinalists, Poway, Eastlake, La Jolla Country Day and Bonita Vista, this season.

“These kids can play ball.”