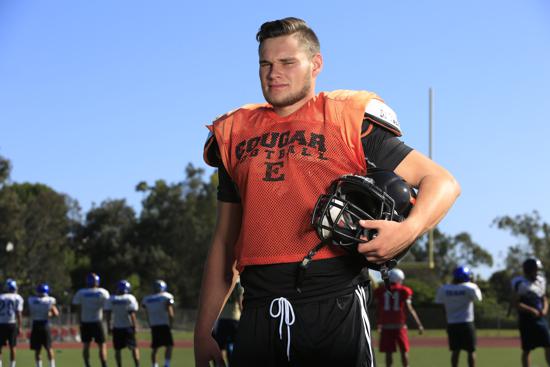 JD Fox played football, basketball and baseball at Escondido High, helping the Cougars to a San Diego Section Division I title in basketball.

In this age of specialization, the three-sport athlete is a dying breed.

Fox played quarterback and middle linebacker at Escondido High, rarely leaving the football field when he was healthy.

Despite playing only 61/2 games on offense because of a shoulder injury, he finished the season with more than 1,300 total yards. He played in nine games on defense with 105 tackles and was a second-team All-San Diego Section choice.

Fox was a starting forward on a basketball team that won the section Division I championship, beating Morse 63-49 in the title game at USD. He averaged 7.0 points, 6.8 rebounds, 3.4 assists and 2.1 steals a game for the Cougars.

In the spring, he hit .242 with a homer and seven doubles on the baseball team while playing third and shortstop.

College, however, has forced him to choose one sport, and football is the winner.

“College is totally different. Football is my favorite sport, so that’s what I’ll play moving forward.

“I like basketball because I can take over, defend, get physical.

“Baseball is an awesome sport, but for me it’s a relaxing sport.”

“JD hurt his throwing shoulder and only played six full games at quarterback,” Bridges said. “But he strapped up the shoulder and played nine games on defense.

“He’s a smart player, a guy who embraces the leadership role. He called signals for us on offense and defense.

“He can run, and he’s physical.

“I can’t believe he didn’t get recruited harder than he was. I think the colleges screwed up and Palomar got a great player.”

Palomar basketball coach John O’Neill saw Fox play in the Comets gym last summer and might try to persuade him to join his team after football.

Fox wasn’t an offensive force in basketball, but with 6-foot-10 Keegan Cummins and guards Khy Kabellis, who will play at North Dakota State, and Marcus Hentley, he didn’t have to be a scorer.

“JD is a fierce competitor. He brings physical and mental toughness. And there is no stage too big for him.”

That’s why Fox is looking forward to Saturday’s football game.

“The all-star practices have been a lot of fun,” Fox said. “Honestly, I had never heard about this game.

“Then Coach Bridges asked if I wanted to play. He didn’t have to ask twice.

“I don’t have anything to prove, but I get to play one more game of high school football, have some fun and hang with the guys for a couple of weeks.