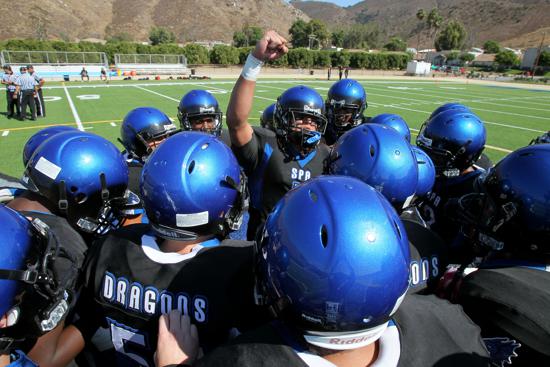 San Pasqual Academy has some speed and size this season.

Scouting report: The Rams must replace a two-time all-league middle linebacker and quarterback as well as a three-time all-league receiver, but Macuga is hopeful the team can capture back-to-back league crowns. He will put the ball in the hands of Thompson, who rushed for 1,015 yards and scored 15 TDs while catching 12 passes for 147 yards and two more TDs. Defense is the team’s strength with returnees Thompson (67 tackles), Garcia (78 tackles), all-leaguer Rodriguez (61 tackles), Busic (52 tackles), Morris (36 tackles) and Vega (27 tackles) forming quite a wall.

Scouting report: After playing the 2014 season with an inexperienced team, the Eagles think they have enough playing time under their belts to challenge for the league title now. Linton and Romano figure to lead the offense while the defense will depend on Linton (39 tackles), Streamer (36 tackles) and Martinez (29 tackles) as it becomes a bit more aggressive than in the past.

Scouting report: The Patriots lost all their running backs and most of their receivers from last year’s team that finished second in the Sunset League after winning the league title in 2012 and ’13. So look for the team, which averaged 300 rushing yards per game and scored 43 TDs in 2014, to rely on Perez, who completed 57 percent of his passes last year, to lead the way. Mascareno topped the team with 15 catches for 373 yards and four TDs. Perez was also one of the team’s leading tacklers with 70 stops as a junior. Silva figures to be the best lineman.

Scouting report: The Dragons lost their top returning running back and best defender to transfer, but Burgo still has an athletic team that features a lot of speed and size up front for a change. Look for Gant and Ransom to be the heart and soul of the offense. If the Dragons’ offense can reach the perimeter, Burgo believes it could be the road to a winning season.

Scouting report: Davis is expecting big things from his team and for that to happen De La Torre must have a great offensive season, even better than the 7.1-yard average per carry he posted last year. Whitney will be a mainstay as well after he rushed for 947 yards and nine TDs in 2014. On defense, the Crusaders will again rely on second-team All-Citrus League defender De La Torre (49 tackles) along with all-league defender Vessey (34 tackles) and Whitney (32 tackles).

Scouting report: With Roberts being the team’s lone senior, the Wildcats also have no juniors on their 10-player team. Still, Wean is hoping to be in the middle of the pack in league play with an eye toward really making a stronger showing next season when there will be plenty of experienced players, including Smith and Holt, who will both be juniors then, and Hall, who will be a 10th-grader.

Scouting report: Last year’s fruitless season had one benefit. The six freshmen who started games are all back, so the experience level for the Wildcats is much improved. Guzman’s plan is to run the ball in order to control the clock a bit, hoping that last year’s frustrating red zone woes will be a distant memory.