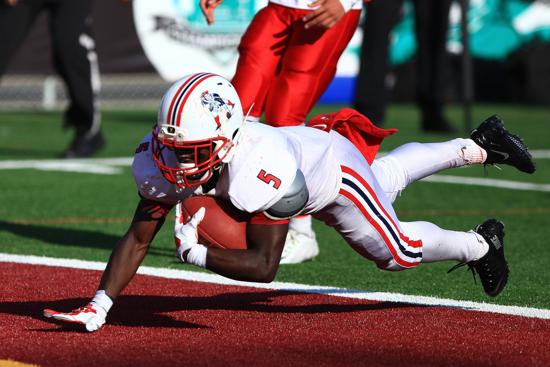 Christian's Adrian Petty is one of the top running backs in the region.

Scouting report: Oliver has won five San Diego Section titles with the Patriots including Division III championships the last two years, yet he was unambiguous when he said: “This is the most talented team I’ve ever had.” It’s hard to argue. Jeremiah threw for 2,945 yards and 33 touchdowns, Petty rushed for 2,128 yards and 29 touchdowns and Sexton caught 60 passes for 1,045 yards and 10 touchdowns last year. Oliver called Petty the best back he’s ever had, but Morones his most irreplaceable player. The biggest question is depth — especially on the interior — as the Patriots move up once again to Division II.

Scouting report: The Cardinals will be young except for a few key players who helped win the City League and reach the Division III championship game last year. Butler moves from running back to quarterback this season after averaging more than 11 yards per carry last season. As a linebacker he racked up 13 tackles per game last season. Bazzo is dangerous running, catching and returning kicks and has a nose for the ball on defense. Ralph calls Gray an “elite tailback” who should bounce back from a knee injury that cut his season short last year.

Scouting report: The Tigers made a surprise run as the 11th seed to the Division III semifinals last season, where they came within seconds of beating Christian, thanks to great defense. The 4-2-5 defense will be solid again with the return of Christmas and Williams, last year’s starting linebackers. The star of the defense though is Irby, who has committed to play cornerback at the University of Nevada. On offense, Morse will be looking to reload at the skill positions, but Poutoa, Reeves and Mattson anchor a solid, experienced line in front of a likely sophomore starter at quarterback.

Scouting report: Martinez is waiting until after the team’s final scrimmage to name a starting quarterback, but whoever takes the snaps will have tall, talented playmakers to target. Patmon is 6-feet-5 and hauled in 14 touchdowns last year. Cline and Corkill are both 6-3 and averaged more than 14 yards per catch. Martinez said the offensive line will dictate his team’s success this year, protecting the quarterback and blocking for Cook. On defense the team will look to Dominic Smith to lead the linebacker corps, while Boek and Patmon are both ball-hawking defensive backs.

Scouting report: Diaz’s tough task of rebuilding the program got even more difficult when the two top offensive returners decided not to play this year. That puts even more responsibility on Sanders and Earl to make plays in the new coaching staff’s multiple-formation, pro-style offense. The secondary should be solid even as they learn a new defense. The coach expects emotional games early — week three sees the Conquistadors face Diaz’s former school, Scripps Ranch, while week five the team welcomes Mount Miguel, where former Serra head coach Brian Basteyns is now an assistant.