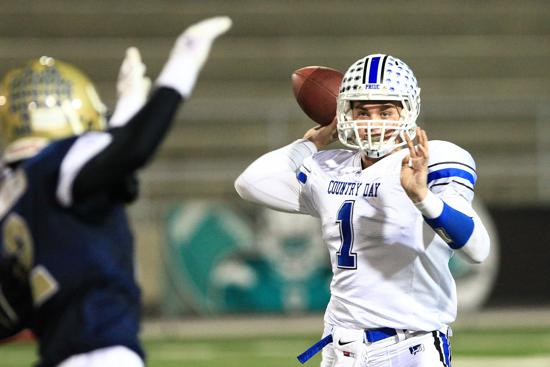 Scouting report: The Knights had another season to remember, winning a Division IV section championship to complete the school’s third unbeaten season in eight years. Winning every game this year will be a challenge, but Bishop’s still will be the team to beat in the league. Seaman (2,076 yards, 37 TDs) passed for more touchdowns than any returning quarterback in the county. Replacing league Offensive Player of the Year Bulla Graft, who rushed for 1,619 yards and 25 touchdowns, will be a challenge. Britanico (1,071 yards, 8 TDs) could be up to the task, however. Mooney (68 catches, 817 yards, 14 TDs) emerged among the county’s top receivers as a freshman. Most of the team’s top tacklers return, led by Woodley and Anderson.

Scouting report: Walcott, an assistant coach, takes over for longtime Lancers coach John Morrison. The continuity will be necessary for a team that lost several players to graduation. The biggest change is at quarterback. Krongard has shown promise in the spring and summer taking over for standout Khaleel Jenkins, who accounted for 2,332 yards and 21 touchdowns last season. Five starters return on the offensive and defensive lines, led by Rauch. Reliable running backs and receivers still need to be identified. Francis Parker aims to challenge for Coastal and Division III titles, but the Lancers will require the first half of the season to develop some continuity.

Scouting report: The Panthers roster includes only six seniors and the team must replace a 3,700-yard passer and a pair of 1,000-yard receivers. Butler said he will count on the offensive line to give Horizon a chance to get its footing while the skill players develop. Cordova, who is moving from receiver to quarterback, is among those who will need time to settle in. Horizon will lean on a strong sophomore class headed by OL-LB Josh Cheigh, Harris and Navarro. Harris is the only returner on the defensive line and Fanucchi leads a revamped linebacking corps. Competing in a league that includes a pair of defending section champions could be daunting.

Scouting report: The Torreys have plenty of experience returning from a team that steamrollered its way to last season’s Division V championship. They outscored playoff opponents a collective 156-41. Burmeister (3,112 yards, 30 TDs passing-553 yards, 13 TDs rushing), who has a commitment to Arizona, leads the way. Goring (84 catches, 1,323 yards, 17 TDs) is among the county’s top targets. Goring, LaRiccia and Petty-Hull were the defense’s top tacklers. One of the few questions is who will replace PK Grayson Lyman? There are only three seniors in the starting lineup, which could be a concern. More likely, it means LJCD is going to be very strong the next two years.

Scouting report: The Eagles, who finished second in the league last season, expect to challenge for a championship. The team is young after suffering substantial graduation losses, but a strong junior class gives Wallace reason for optimism. Whitton takes over behind center. Though there are high hopes for him, Whitton may need a few games before he hits stride. Phillips is a big target who will bolster the passing game and also play a significant role in the middle of the Santa Fe Christian defense. Three other juniors expected to make an impact on both offense and defense are Taylor, Thompson and McRoskey.