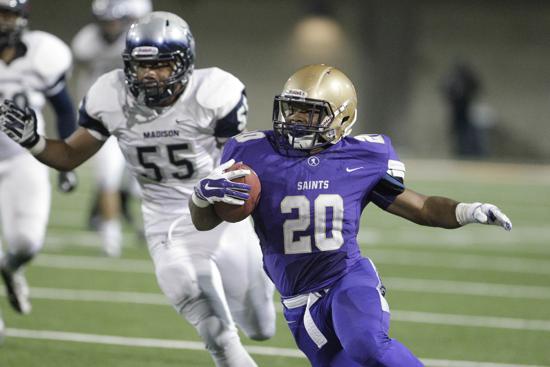 Scouting report: The Dons play one of the county’s most challenging nonleague schedules each year. They do so this season with one of their more youthful teams after graduating 35 seniors (16 starters). “With that youth and that scheduling, it’s going to be an interesting mix,” Doyle said. “The key is the youth stepping up again. You can look at us on paper and we should be pretty good.” But the offensive line is filled mostly with newcomers and may need time to mature. Haynes, a junior, is very athletic, with good bloodlines. His father is Hall of Fame cornerback Mike Haynes. Eastwood and Irwin combined for 1,000 yards last season and should have expanded roles. Irwin has committed to Columbia.

Scouting report: The Hornets have one of the section’s most storied histories, winning eight championships over the past 50 years. The most recent title came in 2012. Graduation losses, especially at the skill positions and on defense, could make it difficult adding to the legacy. Edwards (954 yards, 7 TDs) and Jacquess (27 catches, 448 yards, 3 TDs) provide the makings for a potent offense, but it will help if someone steps up at quarterback. The graduation of Eastern League Defensive Player of the Year Johnny Garcia is a big loss to the defense, which will lean on Dunn, McCorley and Brown.

Scouting report: The Marauders have been perennial playoff participants during Blevins’ two decades as head coach, though they have missed the postseason two of the past three seasons. Mira Mesa’s playoff hopes this year hinge on shoring up a defense that allowed 27 points a game last season while making the offense more productive. Hughes and Thomason, a transfer from Cathedral Catholic, and Liddell-Patacsil have the potential to put points on the board. The defense will know where it stands soon enough, with challenges against El Camino and Mt. Carmel in two of the season’s first three weeks.

Scouting report: The Saints return 19 starters from the team that defeated Madison 49-42 for last year’s Division I championship. About the only question is at quarterback, where Thompson and Justice are bidding to replace the graduated Thomas Goodridge. Preston, the Eastern League Offensive Player of the Year (1,937 yards, 23 TDs), is among the county’s top talents. Sims (630 yards, 11 TDs) is another offensive weapon. Sanchez expects defense, which was decimated by injuries early last season, to be the best in St. Augustine history. The presence of juniors — DE Courtland Koonce and DBs Tariq Thompson and Darrell Broussard — makes the difference between good and great. Broussard also is a talented kick returner.