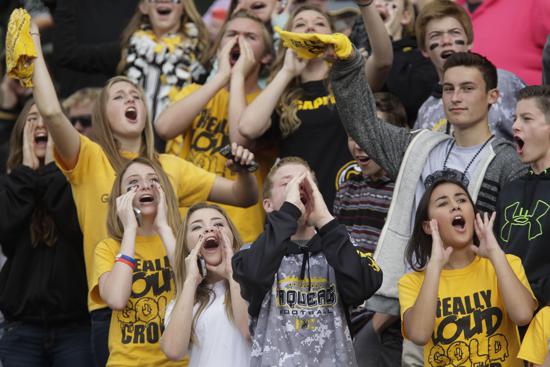 El Capitan fans had plenty to cheer about during last year's championship season.

Scouting report: The senior-loaded Vaqueros scored 560 points and came within 10 yards and a fumble of winning the Division III state championship. No one on this year’s roster has ever scored on varsity. Talk about rebuilding. But don’t count them out. The offensive line is stacked with four returning starters. The skill positions are replenished. The defense (12 ppg) is still rock solid, especially at linebacker. QB is a question mark, but there are three exclamation candidates. League champs face Helix in season finale.

Scouting report: The Foothillers led the county at 497 yards per game, but injuries cost them, including the underrated Harr (collarbone), who had 1,036 all-purpose yards and nine TDs in only six games. In the high-tempo offense, Davis (32 catches, 471 yards, 4 TDs), Pineda (15-198-1), Guevara (10-177-0) and Harr (9-274-3) provide targets for Redfield, who also missed several games after a concussion. Harr, Lilliard, Davis, Lisk and Tejada are attracting colleges. McFaul (82 tackles) and Lilliard lead the defense. Another strength is a good mix of returners and newcomers Bailey, Andrew Mink (DL), Riley Havird (DB) and Tommy Mlyniec (OL).

Scouting report: Starr’s star-studded Scotties again are expected to challenge for an Open Division title that narrowly eluded them last fall. And nearly all the cogs are back, including four All-CIF San Diego Section selectees in Stinson (1,458 yards, 19 TDs), Young, Noa and Hanlon. Strength? The Highlanders pitched four straight shutouts and yielded only 10.8 ppg — and three of the eight returning starters were all-section. The offense averaged 34.8 ppg, and it has three-year starter Austin (1,665 yards, 20 TDs) and Stinson operating behind three returning offensive linemen, including De La Rosa (5-10, 255). The new, green-and-black plaid end zones at Jim Arnaiz Field should be busy (as will the college recruiters).

Scouting report: Injuries, a tough league and a shootout loss to Point Loma (47-35) in the Division I playoffs spelled six straight losses to end last season. The plus side is the Matadors have 13 returning starters and several others with experience. Expect a small but quick squad that is loaded at RB with the speedy Gilmore, physical Hamilton, bulling Hanson and newcomer Dominic McCall. Valadez lacks time under center but has a terrific arm. Jones is one of the best defenders in the section. Former Serra coach Brian Basteyns is the new defensive coordinator.

Scouting report: Steele is huge — Woods (6-1, 310), Hanna (6-1, 290), Oliver (6-3, 250), O’Gorman (6-2, 230), Metz (5-10, 225) — and looking to throw its weight into a deep playoff run. There’s a battle at QB between sophomore Thomas Fishburne and junior Brenden Willis because they’re both capable. Ball carriers Anders, Alexander and JV stud Todd are outstanding. Anders and Todd are pounders, the athletic Alexander is trouble in open space. The defense was riddled with questions in the spring, but Longerbone is now emphatic about his front seven. O’Gorman is getting Ivy looks with a 4.6 GPA.

Scouting report: Returning starters number 15 with eight on a defense that figures to dominate up front. The Fabulous Baker Boys (Logan and Cade, no relation) join Schimke and Lucas Walz in a formidable linebacker corps. Bender (6-4, 220) uses his long arms to swat balls at the line, while Yohe (290) stuffs at nose guard. With Ivy League intentions, Naseh routinely topped 200 passing yards in guiding the Norsemen to the Division I playoffs. Bender and Logan Baker are also being recruited by several schools. Johnson and Sharpe should find room to run behind an experienced line.