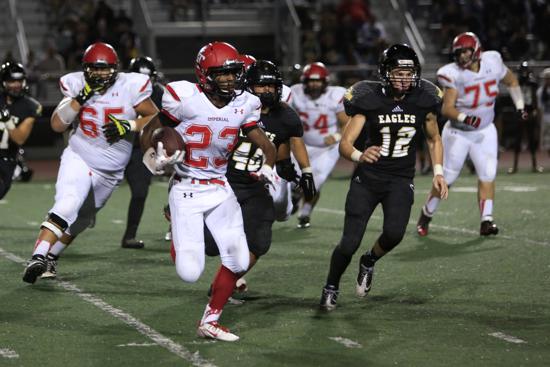 Scouting report: After an opening loss to Hoover (7-0), the Wildcats reeled off 10 straight wins before falling to El Capitan (34-7) in the Division II semifinals. Self returns a solid stable of talented runners and a beast at tackle in Martinez — key for a team that runs about 85 percent of the time. The Wildcats averaged 32 points and yielded only 11.7. Grijalva takes over at QB after playing split end and safety. Team speed and experience at skill positions are strengths as Brawley opens with home games against Christian and Valley Center.

Scouting report: Johnson was a tight end on Imperial Valley College’s last team in 1986 — along with previous head coach Joe Bielma — and now moves up from the JV (4-4). Johnson also coaches the semipro Imperial Valley Knights. He says the Bulldogs are probably the youngest team in the league, but speed and experience in the spread offense are strengths. The defense yielded a whopping 433 points (39.3 ppg). Moreno III moves up from JV with ability to read defenses and provide leadership. Ontiveros is an elusive, hard runner.

Scouting report: Four line starters return, which bodes well for a team that was senior-dominated in the skill positions — 30 of 35 TDs came from seniors. Also, the JV was 9-1 with a loss to Santa Fe Christian. Sanchez threw for 1,133 yards and 11 TDs as a sophomore. Guzman provides backup and is an exceptional punter. Juan “Budda” Chavarin (6-0, 275) missed most of last year with a broken arm. The Spartans played Brawley tight in a 25-21 loss in the annual Bell Game, then beat Coronado before losing to Mater Dei (23-10) in the Division IV semifinals.

Scouting report: Dagnino says he’s normally a “throw-first guy, but we’re probably going to run first this year.” An experienced offensive line and a talented option QB in Cortazar have swayed Dagnino. Team MVP Cortazar, a smart leader, also topped 1,000 yards passing and has good hands in Gaytan and Krisell from a no-huddle set. Crawford is the best on defense, and the Yellowjackets will need his guidance after yielding 289 points. PV made the semifinals in 2013, but league play (1-14) has been especially tough the past three seasons.

Scouting report: As planned from a year ago, Mitosinka promoted three coaches from a talented 9-1 freshman squad. Chief was Frank Lugo, the new offensive coordinator implementing a double-wing formation to take advantage of speed in the backfield and offset size up front. Seniors scored 28 of 31 TDs last year, so there is room for these sophomores. Macias, a junior, and Jungers, a sophomore, are battling at QB. Transfer linebacker Carlos Canez can make an impact after sitting out five games. The Eagles lost to Clairemont (28-13) in the playoffs last year.