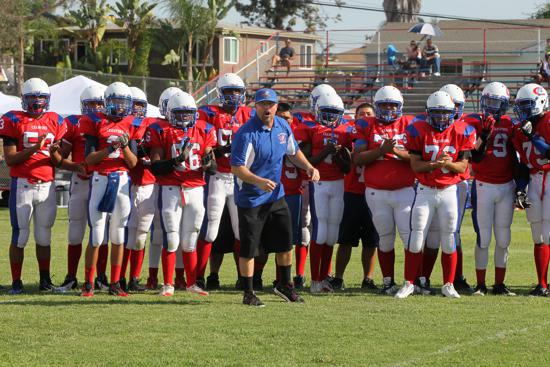 Crawford coach Michael Wright is counting on an improved offense this season.

Scouting report: A glass-half-empty person would say only six starters and eight experienced players return. A glass-half-full type would note that only eight players graduated and there is no shortage of experienced skill position players. Fernandez is a good-size quarterback at 5-11, 180 and he has veteran fullback Chavez and running backs Ruvalcaba and Lyles back with 5-9, 190-pound Del Real also challenging. The real question will be getting Lopez, a 5-8, 260-pound two-way player, and Thomas (6-2, 185) some help up front. The players know what Petree expects of them going into the season.

Scouting report: Everyone knew there would be a dropoff after going 10-2 two years ago, so the four-win season was no shock. Wright almost tripled his number of returning lettermen by playing a lot of youngsters, and he should reap the benefits this year. The Colts don’t pass the ball all that much, but Santos started every game and with 731-yard rusher Raymond Gabriel and two-year starter Chheang returning, expect Crawford to move the ball better this season. The challenge will be to fill the gaps on the line where, at least in this league, 185-pounders can compete.

Scouting report: The search continues for a quarterback with most of the other skill positions able to be manned by experienced players. Bolin will be given the first opportunity, and at 6-1, 175, he certainly passes the eye test. Edwards and Abatti are scatbacks who make defenders miss, and there are a bunch of 11th- and 10th-graders who are looking for the chance to step in. A lack of experience at wide receiver isn’t a big problem because Holtville likes to run the ball and with veterans like Hoyt (6-2, 235), Garcia (6-2, 250), Zarate (5-9, 280) and Bojorquez (5-10, 240), look for the Hornets to keep smashing into the line. The defensive line and linebackers are solid, but if there is a weakness it could be at defensive back.

Scouting report: There is a solid core of good-size, athletic players returning for new coach Vann. Braswell (6-3, 230) will be a huge target for Parra, who returns as the starting QB as a junior. Braswell has outstanding speed and is sure to attract attention. Larson (210), Gutierrez (220) and Bateman (240) are big and experienced. Torres and Jarrell are 6-foot-1 receivers who will stretch the defenses. Newcomers Will and Robinson will get plenty of opportunity to carry the ball. The key athletes are two-way players, so that’s like having 12 starters — a rare luxury in this league. The Redhawks’ schedule has been updated as well.

Scouting report: With 10 returning starters last year, Vincent thrived. Wong welcomed back nine starters, but the seven seniors in that group are about all the experience there is as 13 players graduated. Martinez is a pro-size right tackle at 6-8, 375 pounds, but he is also the only Scot to weigh more than 170 pounds among the returnees. QB Robinson passed for 825 yards, completing almost 60 percent of his attempts with 13 TDs and only three picks. Santana and Uribe will be familiar targets. Valadez was the team’s No. 2 rusher with 485 yards in 2014. The concern will be finding help on the line.