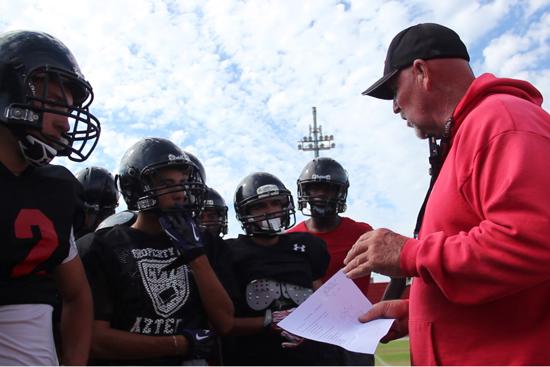 Scouting report: It’s been a while since the Trojans enjoyed an eight-win season, and Graham is hoping the club gains from the success. Defense will carry the team early as nine of 11 starters return there. Look for several of those key defensive players to shift over to the offensive side of the ball for a while as the offense, which lost key skill players, finds its way. WR Trujillo will move to QB this year and should benefit from the 500-yard receiver Barcoo also returning. Barcoo is being recruited as a DB and even possibly as a running back. That defense is led by first-team all-league linebackers Flores and Pereyda, both of whom cover a lot of ground. Up front, three players at 250 pounds or heavier return.

Scouting report: Eight starters return. Backup QB Parra completed 50 percent of his passes. The only problem there is he was the team’s No. 3 receiver, so experienced players like Parker will need to pick up the slack. Only 14 players graduated off the team that might see the defense a little more advanced with all-leaguers Brown (6-0, 215) and Dorame (5-7, 165) leading the way. Blaney (5-9, 260) anchors a line that will be bolstered by sophs Leon King (6-1, 260) and Devin Patterson (6-0, 245). Inda and Rivera should also be keys along with the 5-9, 200-pound safety Cadua.

Scouting report: Hatchett took over midway through preseason, but he has plenty of coaching experience in the South Bay. The Cougars went with Forbes even though he was a freshman a year ago. With one season of leading the offense behind him, he should improve in all areas. What he has is plenty of protection in front of him with the likes of Elizalde (260), Reyes (220), Luna (240) and probably Ornelas (240), Quinones (240) and Terrazas (230) moving over from defense at the start of the season. The running game will be manned by Varela. The key will be how quickly the team can adjust to Hatchett.

Scouting report: Going through 11 coaches in 20 years is not the way to build a program, but Silva will give it a shot. Only one starter returns — Garcia, a 5-9, 240-pound center. There is some size up front with Ortiz (280) and Montez (260). One of the keys will be if Quine can get the ball to the likes of the 6-2 Silva. Hoar, a sophomore, keys the defense from linebacker. Silva says the team is very close and eager, but the Raiders will need to learn quickly.